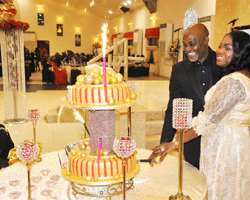 • RMD and wife Jumobi
It was a day of elegance and panache as guests trooped in, in hundreds, to honour Richard Mofe-Damijo at 50. The church auditorium of Household of God in Oregun area of Lagos was filled to capacity as friends and relations of the famous actor and now politician rained encomiums on him.

The celebrator, dressed in a smart black suit  with his wife, Jumobi, who equally appeared ina gorgeous cream gown by his side was the cynosure of eyes as guests embraced them endlessly amid torrential snapshots. The evening of fun and entertainment indeed added colours to the personality and image of the celebrator as well as that of his relations and in-laws.

Compered by the duo of Ali Baba and Teju Baby Face, the birthday bash started with RMD's citation which was done in style by different guests. These include Uncle Tony, Mayor Akinpelu and the guest of honour-Governor Uduaghan. The three saw different ways; as a struggling Warri boy in Lagos, as writer/journalist/publisher and as politician, respectively. These various aspects of life culminate in RMD's personality as a rare soul whose desire for success and excellence has seen him through many professions such as theatre, public relations, journalism, law and politics.

Most importantly, Governor Uduaghan summed it up when he described RMD as humble and hardworking politicain, who has used his talents and office for the benefit of the people of Delta State. According to the governor, RMD, among others, first joined Delta State Government as an adviser and was later promoted a commissioner based on his excellent performance. Besides, RMD has been able to create avenues for the promotion of artistes and their movies through his talent hunt programme in Delta State. He has in the same way, facilitated the building of the Dome, a popular events venue in Asaba which has played major roles in hosting artistes and showcasing their works.

Meanwhile, the audience learnt that RMD would continue to be a role model for the youth since he started out as a young man witha humble background and used his talents and education to improve his lot. He struggled hard to study at the University of Benin before moving on to Lagos where he worked hard to shoot himself to limelight.