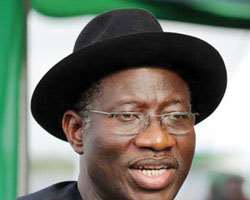 President Goodluck Jonathan is not known to be a controversial person. Even in the heat of his campaign for the last election when he was being battered by opposition parties, and senior members of his political party, the Peoples Democratic Party, he kept his cool. But when those who were managing his campaign could no longer take the slur, one of them, who was the Director of Research and Strategy at the party's Presidential Council, Mike Omeri, fired back at those, who he thought were not according respect to the office the President occupies. Omeri issued a statement that impugned on the character of the presidential candidate of the Congress for Progressive Change, Gen. Muhammadu Buhari(retd.), in which he described the former head of state as being corrupt. His action turned out to be a costly mistake as he was immediately suspended by the council on the order of the President. The President, it was further learnt, was livid with anger, saying that he had not authorised anyone to abuse his opponents just because election was coming.

That was then. Now, President Jonathan has been swimming in unfathomable controversy since the media scooped on his plan to send a bill to the National Assembly that will provide a single tenure for the President and the governors of the 36 states of the federation. In the envisaged bill, the tenure of members of the national and state assemblies would also be increased from the current four years. Apart from that, lawmakers would still be eligible for re-election as their constituencies may determine. But rather than speak on the matter, the President and his advisers kept mute, leaving the members of the opposition parties to roast on the proposed plan.

However, when the criticism became rife, Jonathan's Special Adviser on Media and Publicity, Dr. Reuben Abati, confirmed his master's plan. In a statement, Abati claimed that Jonathan's commitment to a single term for the President and governors was borne out of a patriotic zeal. He said the President was convinced after a painstaking study and belief that the constitutionally guaranteed two terms for presidents and governors was not helping the focus of governance and institutionalisation of democracy at this stage of Nigeria's development. He also added that the President was of the notion that a longer term for lawmakers would also help to stabilise the polity.

The statement said, 'President Jonathan is concerned about the acrimony which the issue of re-election, every four years, generates both at the federal and state levels. The nation is still smarting from the unrest, the desperation for power and the overheating of the polity that has attended each general election, the fall-out of all these is the unending inter and intra-party squabbles which have affected the growth of party democracy in the country, and have further undermined the country's developmental aspirations.'

While defending the proposed plan, Abati added that Jonathan was convinced that the costs of conducting party primaries and the general elections have become too high for the economy to accommodate every four years. The proposed amendment bill, he added, was necessary to consolidate the nation's democracy and allow elected executives to concentrate on governance and service delivery for their full term, instead of running governments with re-election as their primary focus. The clarification, he further said, became necessary in the light of certain reports in a section of the media that the proposed bill was meant to elongate Jonathan's tenure.

Hardly had the clarification been made than the opposition, led by the Action Congress of Nigeria, went to town and described the President's plan as 'selfish', 'a distraction' and 'tenure elongation by subterfuge.' The ACN and the Congress for Progressive Change, in separate interviews, said the proposed amendment was worse than the third term agenda proposed by the Olusegun Obasanjo administration. The ACN also urged Nigerians to reject the plan. While dismissing the President's profession of selflessness in pushing the agenda, the ACN's National Publicity Secretary, Alhaji Lai Mohammed, described the proposed amendment as 'patently fraudulent, deceptively self-serving and a terrible misadventure.'

The CPC, which expressed its condemnation through its National Publicity Secretary, Mr. Rotimi Fashakin, also said the bill was the beginning of a plot to deceive Nigerians. The party said rather than face the urgent task of providing good governance to the people, Jonathan and the PDP were seeking to perpetuate themselves in office. It described the proposal as 'preposterous, immoral and ludicrous.' 'Was this part of the agenda that was concealed before the April elections? For a government that is failing in all parameters of good governance to be contemplating a subtle tenure elongation, within three months of inauguration, is an affront to the people's sovereignty,' the CPC added.

Besides, two human rights groups, Transition Monitoring Group and the Human Rights Writers Association, have faulted the proposed amendment. Chairman of TMG, Mr. Mashood Erubami, described the plan as 'unsolicited and unacceptable.' He said the move was tantamount to a 'hidden transmutation agenda,' hence self-conceited. Erubami said in a statement in Abuja that nobody was convinced by the President's assurance that he would not benefit from the proposal. He added that the urgency attached to the bill when the President should be preoccupied with other priorities of state was an indication that he would be pressured to benefit by the same people, who mooted the idea. He, therefore, asked both state and federal lawmakers to reject the bill as another third term agenda. Expectedly, the Northern apex organisation, Arewa Consultative Forum, also slammed the plan which it described as 'not a solution to Nigeria's problems.'

It was, however, not all knocks for Jonathan over the proposed bill as an Igbo group, the World Ndigbo Youth Council, supported the idea, saying that the South-East would produce Nigeria's next president. The pan-Igbo body, Ohanaeze Ndigbo, also said it was in support of the elongation plan. A constitutional lawyer, Prof. Itsay Sagay, however, described the proposed amendment as reasonable 'but not pressing,' saying it could serve as a temporary solution to political problems facing the country.

He said, 'It is not a bad idea that the President said he was pushing for the amendment for national interest and not for personal interest. But it is not the most pressing issue. The most pressing issue is the issue of federalism. The Federal Government needs to devolve some of its powers. The country is under a unitary government. The Federal Government is controlling a lot of powers and resources it cannot efficiently dispense.'

The furore generated by this idea made the President to open up to members of his party, the PDP at its National Executive Committee meeting on Thursday. He said the idea of a single-term for the president and governors was not entirely his own, as all major political parties, except the ACN, knew about it and endorsed it. He said this was why Yar'Adua set up the then Justice Mohammadu Uwais Electoral Reform Panel. The President said he chaired the panel that collated the views of other political parties then, except the ACN, adding that this was where the idea was agreed to.

Reacting to the President's statement, the ANPP, the Labour Party and the Progressive Peoples Alliance said at no time did they attend a meeting where such a decision was taken. The National Publicity Secretary of the ANPP, Mr. Emma Enukwu, said neither him nor the party chairman was aware that Jonathan discussed the idea with the party. He said, 'I am not aware of that. The chairman of the party is also not aware of that. At no time did the party discuss the issue of single term with the President.

'Either as the vice-president or acting president then or even now as the President, there was no time we sat down with him to discuss the issue of single term.'

Also, the National Chairman of the LP, Chief Dan Nwanyanwu, denied that the President consulted the party on the single tenure proposal. Nwanyanwu stated, 'I don't know if he was sure of what he was saying. We were never part of it either during the tenure of Yar'Adua or during his own tenure as acting president or even as President. We never discussed the issue of single term. I do not know why he decided to remove the ACN. The Labour Party was not part of the six or seven-year single tenure. The LP leadership was not part of any discussion with the President as President or acting president. Maybe people have started misleading him. He should be careful of such people. He should stop romancing people who do not wish the country well.'