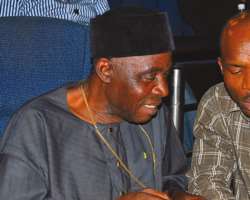 Chief Eddie Efosa Ugboma is a leading light in the Nigerian motion picture industry, otherwise called Nollywood. His critical stance on many issues border on the need to raise the bar, particulaly in view of the dwindling standards in the industry. But Ugboma's argument is being allegedly misconstrued by all those who want to perpetuate mediocrity in the trade.

The former chairman of the Nigeria Film Corporation will tommorrow, July 29, join the league of septuagenarians as he turns 70 years old. He told us that the event would also bring to end his involvement in Nollywood, adding that his retirement is not that he can no longer produce more box office hits like the Black President, Apalara and Toriade but out of frustration from low standards, improper regulatory and distribution system. He spoke more on these issues, including his retirement plans.

How do you feel turning 70?

I feel all right. I'm just regretting about Nigeria as a nation. When Wole Soyinka said that Nigeria was a failed state, President Goodluck Jonathan debunked the claim. I share both sentiments. Nigeria is a failed nation because she has leaders, who are bad, with most terrible followers. Bad leaders and the followers determine who their leaders are and, in Nigeria's situation, our followers are the worst in the world: Who throw stones at our leaders when they think they can get rid of the followers and still get away with it and carry on. If we have strong followership, they can protest draconian policies and other forms of misrule, they can raise non-conformists and eschew tribalism and nepotism, then the leaders will sit up and stop victimising the people.

What projects are you currently working on now?

I'm not working on any projects now. I'm just celebrating my walk into the septuagenarian club; launch my book, entitled Films of Eddie Ugboma at 70, have a lecture and officially announce my retirement from production. I'm retiring out of frustration and not that I'm tired of shooting films.

What are major works?

My films include Black President, Apalara, Oyenusi and Toriade and they all recorded huge successes all over the world. It was not sort of success. Like the Mask I shot, the British Government became involved and told Nigeria to come and buy back her masks instead of coming to block the British Museum. That was a national success.

What led you into movie making?

Movie making is a choice I made when I was a kid, when I saw the power of films: how the Tarzans can come to Africa and use their elephants and lions to kill Africa and we cannot talk to our pussycats; when Americans, who lost the war in Vietnam, still shot a film on how America invaded Vietnam. I also saw John Wayne alone with a gun shooting at 36 rounds, the following day he went to a village and slaughtered everybody. Also Clinton Huston on top of a horse with his stick of cigarette was able to shoot five miles away. That was the power of the industry, which I saw as being very strong and educative.

What are the issues you have against Nollywood, considering your critical stance on the industry?

I tolerate the Nollywood industry. Nolly, according to the dictionary, means nothing. So it is Nothingwood. It is so sad that the industry is replete with people who are gullible. An Indian, at a seminar somewhere, came up to suggest: Oh! Why can't you practitioners make it sound like Hollywood, Bollywood and Nollywood? And everybody yelled: yea! That is why nobody can lay claim to the originality of the name; it came from an Indian and everybody swallowed it. I'm a great admirer of the industry because Nigeria's name didn't come from her founding fathers, not to mention petty leaders in our midst. Anywhere one goes today, people still appreciate a little, the simple films from Nigeria, whether they are blockbusters or trash. The industry has done a lot for Nigeria and I do appreciate the practitioners. The critical stance I have about the industry is to correct many lapses and blocks in the industry so that it can be cleaned up of its mess.

Are you not scared of losing solidarity from young actors and actresses, especially in times of need?

I have a lot of friends who watch my films. And when my daughter got married sometime ago, the hall was overcrowded.

One's colleague is one's enemy. They envy my achievements. At 70, I'm still jumping about with them. And I'm sure with the way some of them are behaving; they may not get up to 40 years if they don't respect their elders. What happened at my daughter's wedding was an eye opener. I thought I had friends but not knowing I had enemies. That is why my father said: 'Pretend to die, so that you can know who are your friends.' The first film village in Nigeria, at Ilogbo, near Agbara was created by me. It was where they were shooting films for the past 20 years before the Igbo people came and took it to the East over funding. And about 350 people from the village attended the wedding among others from government parastatals I served such as Nigeria Film Corporation (NFC), National Film and Video Censors Board (NFVCB) and National Theatre. But when I looked around for my colleagues, I didn't see anyone.

I saw them as petty and small-minded. I'm the chairman of their board of trustees, both producers' and directors' guilds. I sent people for search before the associations were registered. So I'm part of the owners. President and secretary all come and go. It pains them I'm found everywhere in the industry. One thing the public doesn't understand is that there is no distribution in Nigeria. What marketers do is that when a film is produced, everyone buys certain quantities and say they are distributing. And that was why when NFVCB brought the idea of distribution, they kicked against it.

Meanwhile, the marketers work as cartel and ensure no other person comes into the trade. This is one of the reasons I don't give my movies to them. The last three videos I shot, were locked in my house because it is only the movies they produce that they market and even at that, I do produce more movies than they do. They have ended up shooting themselves on the head. The film industry is dead. Marketers think that filmmaking was same thing as buying and selling and they rushed in and murdered it.

There is a feeling among young actors and actresses that you have been old- fashioned in your style of criticism. What is your response to this?

I'm tired of the profession. Law and Medicine don't change. In Medicine, the only thing that changes is the treatment. A doctor is doctor anywhere as well as an accountant. The Nollywood industry is the cheapest place for any musician to come and play his/her guitar. Unfortunately, they are playing the wrong tune. It is the only profession that is not sane, everyone just join. One finds failures of boys and girls who cannot get jobs anywhere claiming to be filmmakers because there is no regulation. My own take is that things should be done the right way or we just forget it. However, they want to come in through the back door. I refused. I will not beg anyone for money. In fact, I do help many of them. I've made many stars; Mercy Johnson and Liz Benson were my products. I advised Sam Loco, Nkem Owoh and Chinwetalu Agu to go into home video since they could not shoot on celluloid. They were all hustlers but now they are big guys who wouldn't bother about me.

“I tolerate the Nollywood industry. Nolly, according to the dictionary, means nothing. So it is Nothingwood. It is so sad that the industry is replete with people who are gullible. An Indian, at a seminar somewhere, came up to suggest: Oh! Why can't you practitioners make it sound like Hollywood, Bollywood and Nollywood? And everybody yelled: yea! That is why nobody can lay claim to the originality of the name; it came from an Indian and everybody swallowed it.

The other day, Nkem Owoh was saying: Eddie Ugboma was my boss. It means that I'm no more his boss. He was paid N2, 100 to appear in my film: America or Die in 1977. It was a big money. The man, who acted the lead, was paid N3, 000. Sam Loco was paid N1, 500. The story was x-raying how Nigerian boys want to go to America at all cost, not knowing that America is a tough place.

What are your plans after retirement?

My people are fishermen and farmers but because of the presence of oil, all the lands have been spoilt. Now I want to create a food foundation which would enable us raise a fish farm and feed Delta people and other Nigerians. The aim is to create jobs for the teeming youths who are doing nothing other than bunkering, they can be taught how to be fish farmers.