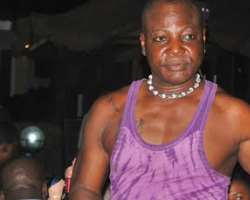 Many people in the entertainment Industry that believes Musical Copyrights Society of Nigeria (MCSN), is a toothless bulldog as getting royalties for its registered members is concerned, they may now rethink their thought, because it has been informed that it's going to be war as MCSN, the popular Collective Management Organization is spoiling for war with all radio and TV stations for non-compliance to the payment of artistes' royalties when due.

it has been scooped that the planned battle is not unconnected to series of fruitless meetings, which have been held in a closed door to find possible ways to get Radio and Television stations across the country to pay artistes' royalty within the shortest time possible or explain how such huge amount of money is been managed amongst the Nigerian regulatory bodies.

the controversial ex-PMAN president and top executive MCSN, Charly Boy, has been unmasked as the leader of the grand picketing of defaulted Radio and TV stations that will begin in the weeks time.

Charly Boy has previously face off with the Nigerian Breweries, N.T.A. and Multi-choice among many other corporate bodies for alleged rights infringements, and which had since opened up a better deal between corporate bodies and Nigerian artistes, is gathered to have disconcerted owners and managers of the accused Radio and TV stations.

Confirming what could be best describes as a Royalty battle, Charly boy said, “Nigerian Artistes deserve to have a share of what they laboured for. They need to benefit from the proceeds that are generated from their sweat and we cannot fold our arms to the detriment of Nigerian Artistes, while Radio and T.V stations swell and smile to banks. I'm the chief enforcer of this present approach and with the support of those who understand what I'm saying, artistes will smile again. All we want is accountability and compliance-simple. We are ready to address the matter in whichever way they want, even if it means employing the gutter tactics, we will.”