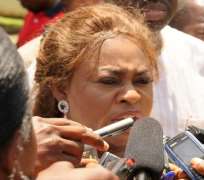 ASABA, July 22, (THEWILL) - The Minister of Aviation Princess Stella Oduah-Ogiemwonyi has expressed satisfaction with the high standard of facilities at the Asaba International Airport noting that the airport could be compared to some of the best in the world.

Oduah-Ogiemwonyi who made the remark when she paid Delta state Governor Dr. Emmanuel Uduaghan a courtesy call in Asaba after inspecting the airport, said the airport meets global specification and standard.

She expressed excitement over the achievement of the Uduaghan administration in the aviation sector saying: “I am very very excited over this airport. It is very very wonderful and has met global standard.”

Emphasizing that she was happy over the contributions of Delta State Government to the industry, the Minister affirmed that the project was in tandem with the vision of President Goodluck Jonathan to use the aviation industry as a tool for economic growth and job creation.

Oduah-Ogiemwonyi therefore enjoined states in the Federation to emulate Delta State and build at least an aerodrome where an aircraft could land.

She promised to persuade the private sector to partner with states and federal government to fast track development in the aviation industry.

The Minister who observed that states would not find it easy to move alone in the industry said the construction of an airport was not easy.

The state Governor Dr. Emmanuel Uduaghan in his remarks promised to ensure that the airport was commercially viable.

He underlined the importance of the Asaba International Airport in opening up the State capital for economic growth and gave assurance that he was poised to make the airport one of the best.

Dr. Uduaghan also promised to ensure that more airlines operated in the airport.

The governor congratulated the Minister on her appointment.

He announced that work was in progress in the 2nd longer run way at the Osubi airport near Warri.

The governor said when completed bigger planes would land at the airport explaining that it would improve air transport in the state.

He expressed appreciation to the Minister for recognising the modest contributions of the State to the aviation industry.