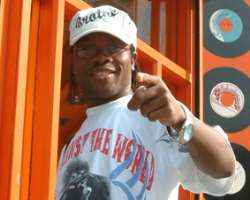 Abia state born Reggae star,Chinagorom Onuoha popularly known as African China, according to insiders sources, has purchased about four plots of land in Festac,Lagos,where he has begun construction of a multi million naira residential building.

The landed property which experts say cost #200 million, we gathered, was purchase early this year before China and his wife did their traditional marriage while the construction of the one storey duplex was reported to have started weeks ago by a Festac Town based building contractor.

We also learnt that that the expected completion date has been fixed for February 2012.

Another cheering news from the stable of the Our Government Bad crooner is that he has finally settled the almost six years squabble with his former record label,Globedisk Music, a fall out that led to China dumping the label that brought him into limelight to float his own personal label.

After the reconciliation, we learnt that China has handed over the master tapes of the two albums he recorded outside Globedisk and has given the company the exclusive rights to handle the distribution of the works henceforth.