Acting on stage is my greatest passion......RMD 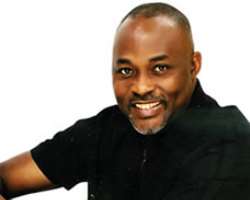 Just last December when delectable actor, Richard Mofe Damijo, was cleared by Delta State House of Assembly to assume the post of Commissioner for Culture, many people, particularly his fans and admirers thought it was a joke by one of his Made in Warri ameolans, but it turned out to be true that the University of Benin-trained theatre artiste and an indigene of Warri was actually made a commissioner.

His appointment from an earlier portfolio, Special Adviser, on Culture to Delta State Governor, was thus received in the arts community as another elevation for one of their own. His was another lift similar to that of Sir Victor Uwaifor, who once served as Culture and Tourism Commissioner in Edo State.

But the truth is that ever since he joined the state government as culture adviser, RMD has proved his mettle, combined his vast experiences in Arts and Law to deliver service in his State. He had been of immense assistance to many artists and culture-based associations, such that each time the artists look for a possible saviour in government, RMD's name usually comes among the top five.

He has lately demonstrated his deep concern for the arts through his benevolence to his constituency-National Association of Nigerian Theatre Arts Practitioners (NANTAP) aside supporting artistes like Stella Monye as well as the newly discovered comedians through his yearly Made in Warri comic shows.

Nevertheless, RMD remains an artiste and a passionate one too. He remains the ever versatile, youthful and restless actor that he is and vows never to compromise standards in his chosen procession. To his credit, RMD who bagged Best Actor of the year on two occasions said he would forever receive joy and fulfillment from acting, despite his invovement in other vocations.

“ Acting gives me fulfillment because that's what people know me for. Most people won't ever see me as a lawyer no matter how successful I am at the Bar. They would never want to see me as that because acting is what people consider the work of my hand that God has blessed me with”, explained RMD while disclosing his love and passion for satiric poetry.

On how he's been able to fare well on stage and screen, the tall, good-looking actor attributed this to his training as a theatre artiste. “ I'm passionate about what I do. My training did not stop at the university. I do train myself daily. I always look for the next challenge, I never trained as a journalist, this came along the line and after sometime, I foundd my PR Company-Whitewater.

But RMD actually does more than acting, journalism or image making. He is also a promoter who discovers, nurtures and supports talents. He has demonstrated this through the Made in Warri show which he established in 2004.

“ Warri is a place where most of the present young comedians come from. Warri has become a source of materials for comedians. So, we said to ourselves…” Since the original boys are there, why not go back home and bring the people who really are the originators of the jokes that people tell. That was what gave birth to Made in Warri.”

According to RMD, Made in Warri is his way of paying back to the society that produced him and also to contribute towards the rehabilitation of the Niger Delta area.

His words: “Made in Warri is actually a pilot project for the whole of Niger Delta. Overtime, we shall have to expand it to Made in Niger Delta. At that time, we can begin to launder the image of the entire area from that of negative to peace-loving, fun-loving and creative people…There is a lot of people in warri, who if given the opportunity, would be able to perform and make something good out of their lives. It is the lack of opportunities to do any other thing that lead them into carrying guns”

Among many films which he featured in, RMD said he would never forget Bridgestone, Violated and of course Out of Bounds which was his first personally produced film. But then, he quickly added that every movie or film comes with its own challenge. He has had opportunities to play diverse roles and he always gets excited whenever he reflects on the variety of roles as a lover, husband, elder, shoemaker and many more.

Born on July 6, 1961, Mofe-Damijo studied at Midwest College, Warri and Anglican Grammar School, Okpara Waterside, in Sapele, in the defunct Bendel State (Now Delta State). He later proceeded to the University of Benin to study Theatre Arts. He graduated in 1983 and shortly after, he started his acting career in Ripples, A TV soap which ran for about eight years. He later featured in another popular soap, Checkmate as Segun Kadiri and has since been a favourite of most soaps and screen shows.

RMD equally had a stint with Concord Newspaper as a reporter after which he got married to a foremost journalist and publisher- the late Mee Mofe Damijo-who founded the Classique Magazie. At a point, RMD started his own publication-Mister Magazine exclusively on men but this was soon rested and he later returned to acting and public relations.

As the only child of his mother, Richard said he was very close to his mother who taught him many domestic chores which he anchored with ease. He has also been a good cook, a traveller and a poet. But acting on stage remains his greatest passion as it is more challenging to him.

In 1997, RMD enlisted at the University of Lagos to study Law. He is today a qualified lawyer, a top actor and a state commissioner.