'I WATCHED MY BABY DROWN IN FLOOD' 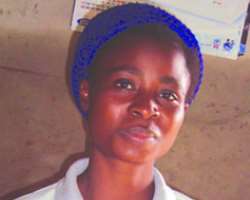 I climbed half wall of uncompleted building with my two kids to escape the flood, the wall collapsed, we fell into the flood which swept away the children, the older one was rescued.' That is the tone Christiana, mother of drowned seven-month-old baby starts her agonizing tale.

Hers is just one of the several of such tales of woes that Lagos harvested last Sunday after the heavens opened their windows, doors, capillaries and nodes and hit the city and state mercilessly with precipitation.

The experience of residents of Arigbanla Street, Abekoko Orile Agege, Lagos, during the heavy rain of last Sunday and Monday might be likened to what happened to the inhabitants of the earth in Noah's era.

At No. 16, Arigbanla Street, where a family lost seven-month-old baby girl, the story is pathetic. The landlord, Pa Julius Adegbola, said he doesn't know where to start again. He is appealing to the government to come to his rescue. 'I don't know where to start from here'. My six tenants didn't come out with anything.' He estimates the value of the damage at about N12 million.

The mum, Christiana Sosanya, whose beloved baby the flood snatched, a narrated to Saturday Sun, how her seven-month-old baby, Elizabeth was drowned on Monday and also how she would have been childless if her four-year-old son had been swept away but for the heroic display of a man who went after him before the flood could take him beyond reach.

She said smiles have left her and doesn't know when she would smile again. She is asking for a place for the family to lay their heads.

She and the children remained indoors as the rain continued unabated. Though their compound had been flooded, they took it to be a light cup that would soon pass over them.

'We didn't realise the extent of the flood until suddenly our premises was totally overtaken and the volume of water kept increasing that we got into panic to rescue some of our items.

I strapped my baby girl to my back, while Iga the older one, was with me in the room because outside was already flooded. Water had started coming into our room and its volume kept rising at unprecedented speed. With Elizabeth on my back, while holding the boy, I came outside and maneuvered through the water to climb a dwarf wall of an uncompleted building in front of our compound. The wall collapsed and I landed on my back. Before I could regain balance, the loincloth with which I girded my baby to my back undid and current of the flood swept away from my reach. The boy had almost gone but for the intervention of one man who saw where he was wedged to a banana tree. He braced all odds to rescue him.

Christiana 25, a foodstuff dealer, is from Cross River State. She is married to Taye Sosanya, an aluminum fabricator.

She appealed to the government to come to their help and rehabilitate them. She also said that the government should urgently work on the canal in their neighbourhood to avoid a similar occurrence in future even though she is not likely going to live in the area anymore.

Residents broke ceilings to escape.
While flood had taken over everywhere, in order to escape being drowned, some of the men at No. 16, Arigbanla, Christiana's neighbours, trapped in their rooms as the water level headed to the lintel, broke their ceilings and climbed to the roof. They remained there until they found a way to escape to less dangerous areas.

Most of the people displaced by the flood now take refuge in Churches and Mosques nearby. The Sosanya's neighbours sleep at the church hall of Atorise Spiritual Church of Christ on the same street.

A disaster waiting to happen
Stepping into Arigbanla Street last Thursday gave an idea of a refugee situation. Inhabitants of the streets whose houses were taken over by the flood brought out all their belongings that were not taken away by the flood outside to dry in the sun. In fact, they were hoping that the sun would show face because Thursday was still rainy all over. Yet, many residents were still busy scooping and throwing water out of the homes.

As they battled to dislodge the water inside, the clouds were already gathering for another downpour. Fear and anxiety took over them as some of them kept gazing at the sky.

The contractor that handled the canal, which cuts across the street, grossly under-estimated the volume of water the canal could hold and retain its strength. All the waters from Abule Egba, Iju and the Abattoir areas emptied into the canal. The problem started when the water volume far exceeded the capacity of the canal that it overflew into the homes.

For Alfa Onalapo, the landlord of No. 49, the worst has happened. He came to Lagos in 1964 and managed to put up the structure when he was strong. Now that he has aged, he said he didn't know what to do. He is calling on government to come to his rescue.