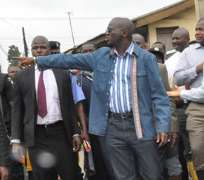 • Governor Fashola stressing some points on the flooding in Agege area.

For over 14 hours on Sunday, Lagos metropolis witnessed a massive downpour and the result: Unprecedented floods that wreaked havoc in the Centre of Execellence. No fewer thatn19 residents were swept away by the menacing flood. By yesterday, the state government ordered the closure of public schools to save pupils from possible tragedy. Their premises have been overtaken by flood.

Governor Babatunde Fashola (SAN) while inspecting the drainage and taking stock yesterday, sympathized with the families of the deceased and those who lost property to the floods.

Although, there was no report of loss of lives, Ogun State too, had its own share of flooding from the torrential rain.

In Lagos, there was traffic snarl, the few buses that operated; drivers raised fares by as much as 100%, property worth billions of Naira were lost to the floods. But there could be succour for the victims as the Director-General, National Emergency Management Authority (NEMA) Muhammad Sani-Sidi, said a team would soon arrive in Lagos to inspect the level of damage for possible intervention by the Federal Government.

He attributed the unprecedented flood to downpour, blockage of water channels and drainages, indiscriminate dumping of refuse among other bad habits by residents.

OLUWOLE FAROTIMI, SAM OTTI and CHRISTOPHER OJI reported that five persons including a pregnant woman were said to have drowned in a canal near the Eko Hospital at Akerele, Surulere, on Sunday.

The victims were said to be in a tricycle, popularly called Keke Marwa, when they were swept off by the rampaging flood.

An eyewitness said the vehicle was overloaded due to scarcity of vehicles on the road. At the Ipaja area of Lagos, 10 persons were believed to have drowned in a canal under construction.

The victims were said to have fallen inside the canal when they could not differentiate between the road and the canal as it was overflown by flood.

As at Press time, two bodies of female victims believed to be returning from their village meetings have been recovered.

When Daily Sun visited the scene, some local divers were seen searching for other bodies.

One of the divers who identified himself as Wasiu, said: 'Many more bodies are still in the Ipaja canal. We will still recover many more. I believed they should be more than 10.'

At the Abule Egba area, a commercial motorcycle rider (okada) and his passenger were said to have died when they fell inside a gutter and were swept off by the flood.

At the Makoko area of Adekunle, Yaba area of Lagos, a seven-year-old boy simply identified as Hassan, died when a fence at the Herbert Macauley Primary school, collapsed on him.

Hassan was said to be trekking home in company of his parents when the wall collapsed, but his parents only sustained minor injuries.

However, at the Jakande area of Ejigbo in the metropolis, a woman and her 11-month-old baby narrowly escaped death on Sunday night when they were rescued by sympathizers as they were being swept away by the flood.

The woman identified as Nkechi Mgbidi and her baby were reportedly on a visit from the eastern part of the country and were trapped in the flood.

Daily Sun learnt that 10 bodies were recovered yesterday. They were drowned in Aboru, a wetland community in Agabado/Oke-Odo Local Council Development Area. The Vice-Chairman, Austin Arogun, told journalists that the victims were drowned because they could not distinguish between the roads and drainage channels which are already covered by flood.

Arogun said his boss, Mr. Kehinde Okumuyide, asked him to carry out impact assessment of the flooding, attributing the tragedy to the unnecessary exposure of the people to 'a canal which is still under construction.'

According to a report, on the busy Lagos-Abeokuta Expressway, a road at Obadeyi junction caved in following the downpour, leading to diversion of traffic to one lane.

Motorists spent over five hours in the traffic snarl that trapped them in the middle of their journey, just as commuters were stranded.

Our correspondent also learnt that a building on Utility Street, off Aina Ajobo Street in Ifako-Ijaiye Local Government Area also collapsed as a result of the rain with a teenager said to be buried in the rubbles as at the time of filing this report.

One of the areas worst hit include Ketu/Alapere area of Lagos where the massive floods swept through many homes sacking many residents, even as it displaced over 50 families who were seen using buckets to bail out water from the homes after the rain had destroyed their belongings.

Another resident of Ojodu-Berger and Alagbole, a boundary town between Lagos and Ogun states who spoke on his plight, urged the governors of both states to embark on construction of drainage channels to avert future occurrence.

'Now that both governors are from the same Action Congress of Nigeria (ACN) they should cooperate and find lasting solution to this problem of flooding killing innocent people,' he added.

As part of efforts to immediately find a lasting solution to the problem, Governor Fashola, who toured the worst hit areas yesterday directed occupants of houses hitherto marked for demolition to relocate immediately or be forced out by the government.

Also, in Surulere, a man simply identified as 'Mallam,' was swept into the deep canal behind Smith Street, Surulere by the surging flood. The man, our reporter learnt, got drowned in the canal while he was trying to retrieve some valuable property floating on the flood.

An eyewitness told Daily Sun that the victim was a trader dealing in iron in the area. He said it was 'Mallam's' attempt to rescue a water drum that was carried by the water that led to his death, as he was washed away by the flood. He said no effort was made to save him because of the depth of the flood. Efforts made to locate him after the flood had abated has since yielded no result.

Fashola blamed some unpatriotic ones who still abuse the use of such facilities, stating that his government would now swing into action by ensuring that the state building regulations laws were enforced to curb the menace.

Speaking with journalists at Arigbanla where he inspected a canal that was filled with refuse dump, the governor said that he would meet with the Federal Government towards securing financial relief to resettle the affected families.

'Canals are not places to dump refuse,' alerting them that the state had been warned by weather forecasters of such terrible rains, saying, 'we will see more rains and flood; this is a period of bad weather; there is nothing anyone can do about it,' he added.

Fashola vowed to clamp down on property owners that do not have building approvals, 'We must go for very serious enforcement and compliance.

'We have realised that many areas where damage is done are places where people built around the canals; literally, people have gone to meet water; this is a challenge of urbanisation; I doubt if these people have approved plans for their properties.

'We are saddened that this has happened; the lesson here now is that we must listen to the government especially on policies that have direct bearing on our lives; we will now move to enforce building rules by ensuring that those people whose houses have been marked for demolition are sacked; that is what government stands for; we cannot afford to keep watching while lives are constantly lost,' he said.

The governor commended the state emergency relief agency and its personnel for prompt response to the situation he said could have claimed more lives.

MATTHEW DIKE and OLA AGBAJE report that unless urgent steps are taken to fix roads linking Ikotun to Ijegun and Abaranje in Alimosho Local Government Area, the two towns and several adjourning villages may soon be cut off entirely from the outside word as part of the fallout of the Sunday's downpour.

When Daily Sun visited the area several commuters were seeing stranded at different bus stops as several commercial buses' drivers have taken their vehicles off the road. Along Ijegun- Ikotun Road, bus stops such as Babalegba, Prince and Oropo were most critical areas. Commercial motorcyclists who dare to ventured were either half submerged or totally submerged in the water. The roads serve as link to several communities including Ijagemo, Ijedodo, Isheri, Kudebu among others. On Abaranje Road, beginning from Aso Rock bus stop, the road to Abaranje was practically impassable when our reporter got there.

Daily Sun visited the Ajeromi/Ifelodun Local Government Area in Lagos yesterday to ascertain the extent of damage. At Alafua Street, Ajegunle, so many buildings were submerged and people had to swim to pick anything from their houses. Vehicles parked in one of the premises had their bumpers buried in the flood.

One of the residents, Mr. Ekene Akorisa, claimed that all his property were destroyed, including all his household items and motorcycle. Akorisa who lives with his younger brothers said he is a businessman. An albino who is also a popular raga musician, Kennedy Uti, a.k.a Yellow Banton, was coming out from the residence of another raga musician called Flekta Man said the flood in the buildings were as high as their window level.

ALBAN OPARA, MADUKA NWEKE, and FOSTER OBI said that in Amuwo-Odofin, most occupants of the Festac Extension Estate, Jakande Estate forgot what other engagements they had with employment and buried their heads in bailing water out of their rooms.

The water, this time spared nobody any respect because the level of water in thier bedrooms made it impossible for anybody to manage at least three minutes sleep. Apart from themselves being busy bailing out water, a lot more made calls to their relations nearby to come and help them evacuate their belongings.

The severity of the flood caused patent dealers, provision stores, supermarkets and food vendors to stay away from their shops as their shops have been covered by the floods. This also affected those living upstairs because they could not see where to buy food to eat as most of the hoteliers could not open their restaurants let alone cook food.

In the past, after a torrential rainfall, people will bail out water for about five to six hours before they could clear their rooms of floods. This time, nobody busied him/herself alone in bailing water; rather most of the occupants were seen evacuating their belongings to other estates where they think is more upland.

Some of those packing their loads who spoke to Daily Sun said that government has failed in its civil obligation to the people. One of the occupants in Festac Extension Estate, Mr. Odukola Bamidele, said the estate does not worth the amount paid to secure flats or apartments anymore.