Style on the run way 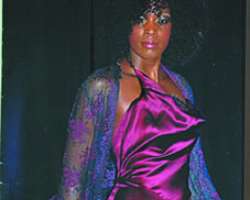 Fashion Designers Association of Nigeria (FADAN), has installed Prince Oyefusi, the Chief Executive Officer of Nobel Afrique, as its 4th national president. The event which took place in Lagos attracted many big names in the Nigerian fashion industry.

In her handover speech, the outgoing president of FADAN, Mrs. Patience Ajekwu-Agbakwu, went down memory lane about FADAN since its inception in 1989. She also enumerated all the achievements and challenges she encountered during her tenure. As with her predecessors, membership drive was part of her administration's main focus.

As a result, she was able to woo many big names in the industry both locally and internationally into the association. Her administration also saw FADAN in many local and international fashion shows. However, she was encoutered with the challenge of funds, and thereafter, urged members to be more dedicated in the promotion of the association. To the incoming president, Mrs. Agbakwu charged him to chat a new course for the members.

In his acceptance speech, the newly elected president assured all that the new executives will reposition the industry with the support of all. He promised to promote love, unity and understanding to achieve a common goal. He also stressed the need to develop new talents in the industry and added: “I want fashion to be seen as not just an art, but as an economic venture. This is a new dawn for the association where the impossible becomes possible”.

In her own comment, Chief Mrs. Opral Benson, urged the members to support the association for its continuous growth as talents abouds in the country. Also speaking, the former president of FADAN, Mrs. Folorunsho Alakija stated that she looks forward to the new executives for the growth and development of the industry. She sees FADAN as big business only if it is given a chance. “We have to let Nigerians know what we can do through fashion. Fashion requires time, attention and zeal of every member to contribute to the development of FADAN”, Alakija said.

High point of the event was a showcase of some designs by the students of Nobel Fashion. One minute silence was also observed in honour of some notable Nigerians who have passed on and have contributed immensely to the growth of fashion in Nigeria. They are, Chief Mrs. Stella Obasanjo who was the grand patron of FADAN, Chief TOS Benson and Chief Folawiyo.