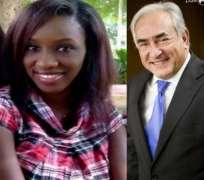 Former IMF chief Dominique Strauss-Kahn was released without bail on Friday after a dramatic court hearing where the sexual assault case against him appeared to dramatically shift in his favour.

The turnabout could upend French politics. The 62-year old Strauss-Kahn was a strong candidate for the 2012 French presidential election until his May 14 arrest and subsequent charges on attempted rape of a hotel maid here.

At a hearing to seek changes to his bail conditions, where he appeared with his wife, Anne Sinclair, prosecutors said the credibility of the maid at the centre of the case had been thrown into question.

As a result, the court agreed to let Strauss-Kahn be freed and his bail and bond returned. He agreed to return to court as needed, including for a July 18 hearing.

"I understand that the circumstances of this case have changed substantially and I agree the risk that he would not be here has receded quite a bit. I release Mr. Strauss-Kahn at his own recognizance," Justice Michael Obus told the court.

Strauss-Kahn smiled as he walked out of the court. He still faces felony charges of attempted rape and sexually assault.

The arrest forced his resignation from the International Monetary Fund and appeared to end his presidential hopes, weeks before he had planned to declare his candidacy.

Strauss-Kahn's supporters in the French Socialist party voiced delight at the apparent reversal and some said they hoped he might re-enter the 2012 presidential race.

The case has hinged on the accuser, a 32-year-old Guinean immigrant who cleaned the $3,000 (1,867.88 pounds)-a-night suite at the Sofitel hotel in Manhattan where Strauss-Kahn was staying.

The New York Times quoted a source close to the investigation as saying the housekeeper had lied repeatedly and prosecutors no longer believed her account of the circumstances of the sexual encounter or of her own background.

The woman's brother told Reuters in Guinea that she was the victim of a smear campaign. "These are lies that have been invented to discredit my sister," the man, called Mamoudou, said by telephone from his home region of Labe, 200 miles (300 km) north of the Guinean capital, Conakry.

Police and prosecutors initially trumpeted the woman's credibility, confident in her story that the IMF chief emerged naked from the bathroom, chased her down the hall and forced her to perform oral sex. Evidence showed semen was found on her uniform collar, a source close to the investigation said.

But defence lawyers challenged the allegation of a violent assault, suggesting a defence built on consensual sex.