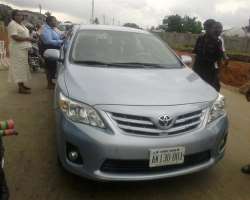 THE TOYOTA COROLL SEDAN THE SLAIN MR BASSEY UDOEMA WAS RIDING IN WHEN HE WAS MURDERED BY A LONE GUNMAN IN AKWA IBOM STATE.
Listen to article

UYO, June 29, (THEWILL) – The Director of Administrations in the Office of the Deputy Governor of Akwa Ibom State, Mr. Bassey Udoema has been shot to death by a yet to be identified gunman along Ikot Ekpene Road by Ikpa Junction.

He was shot today (Wednesday) inside his Toyota Corolla sedan during a brief traffic stop.

His shooter according to an eye witness was a man who jumped off a motorcycle (Okada) pumped two bullets into Mr. Udoema, who was sitting behind his driver in the blue colored Toyota Corolla with registration number; AK 130 DOI, and left the scene in the same motorcycle with his accomplice in the murder.

Mr. Udoema was taken to a nearby hospital after the shooting by sympathizers, who had earlier fled the scene of the shooting, the eyewitness told THEWILL.

Policemen later stormed the scene of the incident and took the driver into custody. They also took possession of the vehicle.

Akwa Ibom State Commissioner of Police, Mr. Felix Uyanna confirmed the shooting to THEWILL in a conference call and added that investigations had started into the killing.

To achieve this, all genuine commercial motorcycle owners in the metropolis have been instructed by the state government to report at the state Ministry of Works and Transport with effect from today with two passport size photographs and original documents of their motorcycle to receive N50, 000 in exchange for their bikes.

The state government has designated two hundred (KEKE NAPEP) tricycles, three hundred sedans, forty Toyota buses and ten Marcopolo buses, which would be distributed to qualified transporters in the state, to replace the withdrawn motorcycles on Uyo roads.