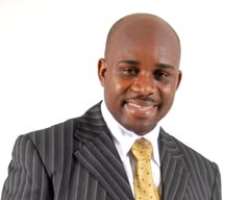 Have you ever watched such films as Mirror of Beauty, Mission to Nowhere? If you have, then you most certainly have come across the name Teco Benson. He is one of the few movie directors in Nigeria considered daring because of the kind of movies they shoot— action.

Married with four beautiful kids Teco spoke to Showtime Celebrity and Aramide Pius was on the spot to captured the moment.

Read on.
How would you rate the Nigeria motion picture industry when compared to Hollywood?

We are not there yet in the area of quality and the reason is simply because the number of people who are not doing it right are the majority. So, for an outsider it will be difficult to identify with the good ones among them.

And if you are to conduct a random sampling of movies produced in the country, you'd find that the first ten movies might be the wrong ones and you just may conclude that everything is the trash of the industry.

But the truth is that it is not the best way to assess these things. There are people who are doing these things the right way but because the industry started informally, there is no code of ethics, there are no entry and exit qualifications or conditions.

When people saw that the first film ever released made money, they just walked in and daily people are still rushing in, leaving their former businesses.

I blame the government partly for that because for now there is a body called Motion Pictures Commissioners of Nigeria (MOPICON) that was set up, concluded, but is still being delayed by the government.

If government had passed that act into law, probably the industry would have been cleaned up and the code of ethics will come out and guide practitioners. Right now such code of ethics is not in existence.

The movie industry is unlike the music industry where any Jack or Jill could walk into the studio record an album and instantly become a celebrity. The film industry is a peculiar industry where you require loads of professional certificates.

Now each of these centres can only control their own members, their own centers, and no matter how good they can train their own centres, it can never have an effect on the practitioners as a whole.

That is why we need that practitioners council where everybody irrespective of what you practice is a member of that body. This will help eliminate such practice as recycling stories. Producers take the audience for granted.

And yet they don't know that Nigerians are very intelligent people who also watch our films, side by side with Hollywood films. These people see the standard of these foreign productions and the story line.

Yet you recycle these foreign stories and put them out for the same people to buy in the market and you think they will buy it?

If you want to generally rate Nollywood, we have tried because if you begin to compare Nollywood and Hollywood, I will tell you it's not a fair comparison because Hollywood started in 1896 and the same thing that is happening today in Nollywood happened in America. They went through this stage that we are in.

It is crucial that we understand things these way because it's not possible to compare our industry to theirs because technologically we are not there yet.

If I go to the US and make a film, you will see the difference because all the manpower and all the things are there for me. I make action movies and most of the things I achieve in the movies are done by me within the limits of my budget.

Can you imagine comparing a budget of N10 million for a movie with what is produced in Hollywood at more than 100 million Dollars? My sister, no matter how you try, you can not compare life with death.

When you have two hundred million dollars to play with, please give me two million dollars and I will shock you with the quality of job I'd produced. And give me ten million dollars, I will move to US and create Africa in US. All the people I need are there. If I want to make a car somersault in the air and blow up into pieces. Just anything I want to do, nothing is impossible there.

On that note, what is your view on piracy and what do you think can be done?

The problem is that the operators of these video clubs rush to the market on the first day of release of these films and buy two, three copies of each of these movies, rush back to the streets and rent them to the people within their vicinity. Nobody buys the film.

And when a few of the people want to buy this film, they go the operators and the operators tell them a copy is one thousand naira.

Just to discourage them from buying it because when they buy, the money goes to the producer but when you rent, the money is going to the pocket of the owner of the video club. That is what is happening and people expect you to make a better film tomorrow.

If you don't recover your money, if you don't realize your investment, how do you think somebody can go and make another film?

Government concentrates so much on oil forgetting the power of other media. The improved image we have as a country today, is because of Nollywood. No matter how bad this industry is, Nollywood has changed to a large extent the perception people have about Nigeria.

And no matter the money we spend on image laundering sending the ministers to go and tell people that we are very good, you don't quantify that with the effect of the films because this is the first time we are telling our story from our perspectives. If you allow the whiteman to come and make a film here, he will make a film based on his perception about Africa.

The biggest one that is making me bleed, for I'm not just weeping anymore, is the activities of the pirates who reproduce on one DVD, between twenty to thirty films Nigerian and foreign movies.

So they are not authentic?
They are from the pirates! How can they be authentic? You see somebody take like twenty of your films and sell it in a DVD for three hundred naira, is that not the end for some of us? Some of us are going to get in to other businesses because who is a fool?

You suffer yourself to make a film and somebody takes all your efforts and put thirty in one DVD and sells it on the street. And they are walking freely and government is not saying anything about it. It means the government does not even want you to survive in the first place.

Precisely what strategies are in place to tackle this problem? Or is there nothing that is being done about it?

The best answer should come from the Nigeria Copyright Commission because they are the agency of government that is supposed to handle it and they have not done anything about it. We have complained and still nothing has been done. Now as practitioners, we have made some efforts but how far can you succeed as an individual?

I remember about five years ago, I went to a video club, I saw them renting my movies and I went there to harass them, they almost lynched me. In justifying what they were doing, they told me they have a license from the census board.

The certificate or the paper the census board gives to them is to register their premises as a video club premises just like you are given a license to sell beer which registers your premise as a place where people can come and drink beer, it does not mean that census board empowered them to take any producer's film and rent them without any compensation, without any income to the owner of the film. It is criminal and they know it but who will bell the cat?

How do you joggle between your job as a film maker and your home front?

Like I said earlier, life is about challenges. Before I got married, I knew that this is the type of job I am going to do so I prepared for it. And as a dedicated family man, I like to give enough time for my family.

When I go out, I try to make sure that most of my movies are shot in Lagos so that at the end of the day I will still have time to go back to them.

But if you are to depart from your family like a month or two while making film, you will be psychologically distracted because you will be thinking of your family. You will want to see them, you want to see your wife and all that.

Personally, I have devised a means so that my absence is not felt so much. I have tried to achieve a balance. Trust is another important factor in coping in situations like that. If there is trust between husband and wife, then the fear of whether the man has gone with another woman will not be there.

What is your perception about sexual harassment in Nollywood?

Sexual harassment is an end time phenomenon and it exists everywhere and in every facet of life. It is in the banking, business sectors. Even in Churches where preaching against sexual immorality abound, it's even there.

The reason that of Nollywood seems to be in the spotlight is because it is show business. The media direct their spotlights on the industry and so anything anybody does is actually in the media.

But we have to be fair, some producers and directors take advantage of some actresses because they know that some girls want to become actresses and they are desperate. But the girls are to be blamed too.

Many at time these girls in their desperation to get to the top, use what they have to try and get what they want from some producers. They offer it to you because they know that the competition is so high.

They know that they may come to the audition and fail, (some of them are not even educated but they have fine face) and so the only thing they can do is to have their way of securing themselves because if they go there, other people may come and defeat them hands down.

They call it dress to kill. I have realized that women dress from their house to the office and when they get there without anybody stopping them on the way, they begin to examine themselves in the mirror to see as if something is wrong with them.

This harassment comes but if you have faith in God, you will overcome. The fastest thing that can kill a man is to fall into that trap and the trap comes everyday.

How do you unwind?
I don't know if I ever have that time but what I do to relax is to spend time with my family. Because I work all the time, so each time I stay with my family I feel happy.