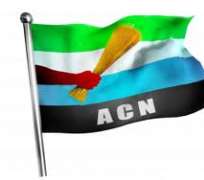 LAGOS-THE much touted disharmony between Governor Fashola and the leadership of Action Congress of Nigeria, ACN, in Lagos State, peaked, weekend, when members of the state Assembly turned down the list of commissioners submitted by the governor for their consideration and approval.

The Assemblymen are antagonising the governor because he dropped most of the nominees from the party. Sources at the State House of Assembly told Vanguard that the ACN leadership in Lagos had earlier submitted list of some people but Fashola reportedly dropped most of them.

Some big wigs in ACN were said to be poised for a showdown with Fashola shortly after he said before the April elections and during his campaigns that he would choose the best hands as commissioners in his cabinet if returned as governor for a second term in office.

Fashola is known to be disposed to working with technocrats while the powers that be in ACN believe that party loyalists, especially those that stepped down for other candidates during the last primaries, should be compensated.

Vanguard learnt that the list submitted by the governor did not go down well with the 40 member-House of Assembly who have vowed to return the commissioners' list to the governor today for amendment. The decision to return the list was, however, arrived at after several meetings held at different locations.

Usually reliable sources said the list excludes those that have spent two terms in the cabinet, from 2007 till date while those who were earlier tipped to make a comeback failed. The total number of the commissioners to be on the governor's list could not be confirmed as at yesterday, but sources said they were well over 30.

The most dramatic comeback out of the lot is the former Commissioner for the Environment, Mr. Tunji Bello; who headed the campaign committee for Fashola's second term bid; former Mushin council boss, Mr. Seye Oladejo; a former state legislator, Mr. Gbolahan Lawal Ojora.

It was learnt that the sharing formula seems to be the reason for the delay of the final lists.

It will be recalled that about 125 curriculum vitaes, CVs, and representations were sent to Governor Fashola and prominent ACN members in the state for possible appointments into the state EXCO.

Last Wednesday, an entourage of the ruling party, ACN, paid a courtesy call on Governor Babatunde Fashola in what seemed to be an agenda setting meeting for his second term with a charge to build on the success recorded in his first term in office.

Ajomale at that meeting said 'Our mission before the elections was that we wanted to ensure that we still have the control of Lagos, that is the Action Congress of Nigeria, apart from that, let me rejoice with you that you have young children now that have just been delivered, because from one, ACN now proudly has six governors, which was possible because the people saw what you demonstrated through progressive governance',

The party urged the governor not to be too far away from the party saying;'now is the time that your service is needed most,' and assured the governor of  the party's continuous support to ensure success in his second term in office.

Responding, Fashola commended the visitors for their efficiency and hard work during the pre_electioneering campaign, saying that his victory as well as those of the members of the National and State House of Assembly was the product of the self less effort of the party and the trust the electorate have on the ACN.

'We must ensure that we make promises and we keep to them, that where promises become difficult to implement, we must go back to them, share with them the difficulties we are facing, ' he said.