Miss Pepeiye Off To Spain 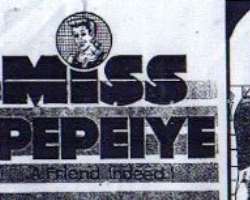 Former Miss Pepeiye of the Papa Ajasco and Company series, Rosemary Emoson, is heavily pregnant and hoping to be delivered of her first child in Spain.

http://www.nollywoodgists.com's findings revealed that the pregnant lady, who only reigned as Miss Pepeiye for a while before proceeding to other acting jobs in Nollywood, is now a resident of Spain and an expectant mother of a baby boy.

Although there were speculations that the actress plotted to get hooked in a relationship with a white man in her search for greener pastures, Emoson refuted the rumour, claiming that she is in love and was impregnated by the man of her dreams.

“After the delivery of my baby, I shall return home with it and you will see that love radiates between my husband and I,” she added.

The actress, having suffered a ban from her church, Kingdom Hall of Jehovah Witnesses, for acting as a prostitute in Super Story years back, Emoson hit the limelight by featuring in Yoruba and English movies.Towards the end of last year, she also delved into TV presentation to prove her versatility, but soon after lost her job as Miss Pepeiye. Rosemary jetted out to Europe and pitched her tent in Spain, where she seeks a greener pasture. She is currently studying and doing business in the country.