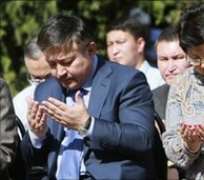 Kyrgyzstan has marked one year since sectarian violence ravaged the south of the country, leaving hundreds dead.

President Roza Otunbayeva, whose government has been criticised for not tackling ongoing tension, said she took moral responsibility for the unrest.

But she told the BBC that Kyrgyzstan had achieved a lot in the past year – including holding a free election.

Some 470 people died in four days of clashes between Kyrgyz and ethnic Uzbeks in the south of the country.

Hundreds of people were injured and thousands of homes destroyed in four days of violence, mainly around the cities of Osh and Jalalabad.

The unrest followed weeks of turmoil after the ousting of President Kurmanbek Bakiyev in a mass uprising in April 2010.

To mark the anniversary, Ms Otunbayeva unveiled a marble statue in Osh depicting two women weeping and embracing – one from the Uzbek community, the other an ethnic Kyrgyz.

“We took the moral responsibility for the clashes, for all the tragic events of 2010. We're not going to run away from that,” she told the BBC's Central Asian service.

She said the country's major achievment had been holding a free and fair election for the first time in 20 years of independence from the Soviet Union.

“Two days of debates in parliament have shown that we are not at war between clans – we have discussed under one roof all together those tragic, very bloody events,” she said.

Human Rights Watch and Amnesty International both warned this week that Kyrgyzstan has not tackled the divisions between Kyrgyz and Uzbek communities.

The groups said failure to deliver justice for the killings could spark more violence.

Most of those killed were ethnic Uzbeks, but Amnesty says the authorities have targeted ethnic Uzbeks in their investigations.

Elaman Myrzabek-uulu, an ethnic Kyrgyz from Osh, told Reuters news agency relations between the groups “ought to be better”.

The 17-year-old volunteers in an unarmed vigilante team helping the police to keep order in Osh, but said he was concerned there were no Uzbeks among them.

“Uzbeks are not open for contact. They do not trust us, although I aided Uzbeks during the June events,” he said.