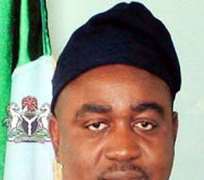 In spite of the threats by the Action Congress of Nigeria that the Benue state governor and PDP governorship candidate, Gabriel Suswam would be defeated  at the polls, the people of Benue put a lie to  ACN vow  as  they gave  Governor Suswam a fresh mandate.

ACN, not comfortable with INEC declaration had since filed petitions to challenge the PDP victory at the polls. The ACN gubernatorial candidate, Professor Steve Ugbah  had  expressed confidence in the tribunal to proclaim him the winner of the governorship election in Benue.

''The whole country knows that the ACN won the elections in Benue. We are at the tribunal right now and we will prove our case by God's grace,'' he had told journalists.

Though INEC had declared that the PDP won in 15 out of the 23 local government areas while it also garnered two third in all the council areas, the Action Congress of Nigeria is however claiming that it won the election contrary to what INEC declared.

The man whose victory is being derided as a stolen mandate is however bemused over the claim of the ACN victory at the governorship election.

Speaking with journalists penultimate week in Abuja, Governor Suswam disclosed that the ACN  purported claim to victory could not be substantiated, as he noted that the pattern of votes during the elections showed that the Peoples' Democratic Party (PDP) dominated not only the governorship election in the state but also other elections.

He said he was neither scared nor worried over the case instituted by the ACN candidate, adding that his lawyers were capable of handling the case based on the facts before them.

Giving details of the elections in Benue State, Governor Suswam reeled out  data to refute the  ACN claim to popularity in the state.

He told journalists that out of the 28 seats in the state House of Assembly, the PDP won 20 leaving the remaining eight seats for the ACN, while the PDP also won eight seats out of the 11 seats available in the House of Representatives.

Suswam also recalled that the PDP won two out of the three senatorial slots, leaving the  ACN with one seat.

You can see that the people of the state are for the PDP and they demonstrated their love for the party with the way they voted for us during the election.

The results from the conduct of National Assembly to the presidential elections no doubt showed that we are on ground and there was no way the people of the state could just change their minds when it was time for the governorship election.

'To me, though some people are saying the action of the ACN people is meant to distract me, but I see it as the beauty of democracy.

Democracy is meant to adjudicate when there is a dispute.

'If the judiciary does not have a role to play, the Constitution and the Electoral Act would have been silent on it.

'However, I want my opponent to know that we  are all from Benue state and we will all return to the state. Therefore, in whatever we do, we should always have the interest of the people at heart. Because we have no other state than this, we should all join hands to make it better.'

On the alleged insecurity in his state, Suswam dismissed it as a propaganda orchestrated by his opponents with the intention to portray him as not capable of ruling the state.

Miffed by what it called the desperation of Professor Steve Ugba to rule the state, Benue state indigenes in the United States and the United Kingdom have expressed concern over the litigation arising from the governorship election in the state, which they submitted could constitute a hindrance to governance.

Utyondukaa Ikper (Pittsburgh, USA) and made available to journalists in Abuja, they appealed to the ACN candidate, not to seek for victory through the backdoor as  the voting trend before the gubernatorial election  was quite revealing: that the ACN  lacked the mass appeal it lay claim to in Benue.

PDP, just like the other political parties, should serve them.

'So in some local government areas, the PDP won but in others they lost while the ACN won. Interestingly enough, the PDP has not come out to cry foul where they lost, at least not as much as the Action Congress of Nigeria (CAN) which performed abysmally at the polls.

There must be something wrong somewhere.''
Benue rancorous party chieftains
Party chieftains in Benue continue to lay claim to victory, or allege rigging depending on the side of the political divide. Senator George Akume and Joseph Waku have continued to accuse PDP and INEC of falsifying results to favour PDP.

Former Minister of Steel in the Second Republic, Paul Unongo who was alleged to have worked for the ACN behind the scene despite being a major stakeholder in the PDP also claimed that Steve Ugbah of the CAN won the election.

But a PDP faithful told Daily Sun that Unongo made the statement, because he has personal score to settle with Governor Suswam.

''He made the comment after Suswam had sacked his wife from his cabinet as a Commissioner.''

'Elections have been won and lost in spite of the anti-party activities perpetrated by some disloyal PDP chieftain like Unongo. The PDP clearly won the governorship election convincingly. The former Minister of Steel is working against the PDP in all the elections even though he pretends to be a chieftain of the party'

Chief Sunday Akure pointed out that Unongo has by the utterances brought out his dark political side which has in turn exposed him as an opportunistic politician who would cheer and applaud so long as his price is paid.

The PDP chieftain maintained that the former Minister of Steel has suddenly found fault with the Suswam administration when his wife was relieved of her appointment in the aftermath of the April 26 polls stressing that such attitude was self-serving.

He called on the former minister to do the honourable thing by resigning from the PDP and officially declaring for the ACN if he wishes to fight the cause of the opposition party. 'It is deceptive for him to remain in the PDP while making such unguarded and flippant comments about the leader of the party in the state'.

Suswam, long distance runner
In spite of the muck racking over the results of the election, Governor Suswam has assured the Benue electorate that he would not be distracted by the propaganda machinery of the ACN and their supporters. He said as the Governor of Benue State, he has restated the commitment of his administration to the welfare of all the people by completing all on-going projects and embarking on new ones.

Suswam also promised to always enhance social welfare and provide good governance, stressing that his focus would be to serve the people of the state without any form of discrimination.

'In seeking re-election, my motivation was, and remains, a strong commitment to serve all the people of Benue State without any form of discrimination whatsoever. This focus of our administration was demonstrated in the pattern of appointments, infrastructure development and patronage which were widely extended to all the major segments of the state.'

The governor who noted that without political rival, democracy would become a drab, monotonous engagement promised that rival political parties would be carried along in the larger interest of  the people.

'Our opponents put up a good fight, and we hope they will offer constructive ideas for the good governance of the state. On our part, we hereby extend a hand of fellowship to all of them. We pledge to sound them out on policy issues, and to tap their individual and collective talents in the service of our people whenever necessary. We hope to unite our efforts in the quest for more effective participation in national affairs.'