Getting married is like 4th Mainland bridge coming soon — Durella, King of the Zanga 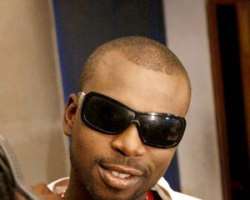 The first time we heard him, many wondered who the D'banj 'wanna-be' was; but after dropping four singles with that consistent character, it might be time for a rethink. He grew up in a certain ghetto part of Lagos, where the likes of Mo Hits' Wande Coal evolved.

We call it Mushin, but he calls it the Zanga and has self named himself, King of the Zanga. A thorough bred Mushin guy by all standards, Durella has seen it all in terms of street vices, as he explains his like pattern of singing with pop star, D'banj. May be when his album debuts on TC Records later this month, it just might prove he is no photocopy after all. Here is Durella for your weekend delight.

Almost everyone calls you Durella but I'm sure you have your real names. So, what is your name?

My real name is Oluwadamilare Okunlaja

Are you telling me you are Yoruba?

Yes, I am a Yoruba boy from Ijebu-Ijesha. I grew up in Mushin where I call:' the big M City',that is where the Zanga is. I am the king of the Zanga. I came out with my single, The Zanga last year after which I came out with Wiskolo wiska. I then dropped Shayo.

And I need you to understand that Durella is just an ordinary Zanga boy trying to make ends meet. Please, to everybody out there; I am not a trouble maker.

How did you come by the name Durella?

Actually my name is Oluwadare. When I was in school, I used to sing and from there, everybody started calling me Durel. When I grew up, the Zanga lifted it to Durella.

The Zangalese are my friends on the street, whom we grew up together.

Growing up was not easy, but it was at the same time beautiful and fun because I grew up with this very big family including my grandma and grandpa from my mother's side. It was very beautiful growing up with them but on the long run, I needed to go to the streets to make money. That wasn't really easy.

So how did you get yourself ready?

I have been training for a very long time. You know they say if you are not prepared when opportunity comes...

How difficult was surviving in the Zanga?

If you've heard about Mushin, you will know it's not easy living and growing up in Mushin and being successful in Mushin, but I thank God. In the Zanga, I can just say one thing and it will mean a whole lot. I can just tell one of my Zangalese now that it's time to go wiskolowiska and he'll understand.

For how long have you been playing music?

That's for a very long time now. I have been a star all my life. I was a star at the local level for ten years before my friends said they think I should take it worldwide. I was thinking of later but I was like, 'since you guys want it now, then let's go.'

So while growing up, were you thinking of music?

While growing up I was always thinking of music, every time, everyday of my life. I would sit on the toilet seat thinking about myself, imagining things that I think I could become tomorrow and look at me today. It's proof that dreams come true. When you fantasize, it can come true.

Who were the people who made you love music at that time?

Everybody that was on the game while I was growing up. It was Michael Jackson before Hip Hop came into Nigeria. I had always wanted to be like Michael Jackson, but I don't know how to dance but right now, I have my own form of dance.

Tell me some of the pranks you played to get by while growing up?

There is no secret ingredient to this thing. there is no juju, and no film trick. It's one thing and that one thing is capital, G-O-D. There is no super force, no super ingredient. It's just God. He put me where I am now.

Did you know Wande Coal while growing up in Mushin?

I didn't know him when I was in Mushin but later on, we got to know each other when we met on stage for shows, and that was how I found out that he grew up in Mushin.

You portray a music character very similar and in fact, can be mistaken for D'banj's. Why is there so much similarity between your act and his and how well do you know him?

Really and truly, I am a kind of person God has made so special so I appreciate who I am. I don't think there should be any bias thinking about it. D'banj is my friend and colleague so there's no mixed feelings because he is just being natural like I am.. This question is a question we need to ask somebody but I don't know who.

When did you come into this style of singing?

If you want to find out, that means you have to go back to when I was young. You need to see for yourself. I write my songs and my raps. I am a jack of all trades. I trained for these things while I was working in the Zanga. It's my mood that inspires my writing.

Where does the Zanga fit into your music ambitions?

That people all over the world will know that people in the Zanga have a lot of talent. If God takes me beyond where I am now, I am going to try to spread the message. I am not talking for myself but for every Zangalese. I want to get to a point where I can speak for everybody out there. It's not easy growing up without father and mother, yet going to school, trying to feed yourself and all that.

So you grew up in the absence of your parents?

I grew up with grandparents.

How did you get money to record your first single?

Actually, it's not like I have always been broke or something, but I have had a lot of support from my family. The money for my first recording was given to me by my mum. My mum actually saw in me that I have a mission and vision.

Do you have siblings and how many are they?

I have four siblings. It's a polygamous home and I am the first child

Did you know you were going to break even with music?

I knew I was gonna break in.

Have you tried exploring the academic lane?

I went to Community Primary School in Mushin. That was the school Pasuma went to, he was my senior. Then I went to LASPOTECH, Iyana Isolo but I didn't finish. I was studying Insurance. The truth is studying was not really in my head because at the same time, I wanted to do music. Along the line, something came up that distracted me from school.

So are you playing music full time?

Yes, of course. I am not like some people who if you ask, 'Are you a full time lawyer?' They will say I'm a lawyer and a doctor. Music is all I do; and that's why I'm putting all my strength into it.

What's the most interesting thing about fame?

The most interesting thing about fame is that with fame, you have more money. Fame brings money.

Have you suffered any embarrassment on account of fame?

I don't have manners so when someone embarrasses me, I see it as normal. I don't count it as anything. I don't have feelings because I grew up where I was tortured. So there is no time for feelings anymore. Just make sure you stay away from the streets.

Now, no time for feelings doesn't mean there is no special lady you are planning to get married to, right?

I hope one day you will write a book about the Zanga?

So many things will happen about the Zanga... . There is going to be a film about the Zanga, a documentary and a book. The music video of the Zanga is out already.