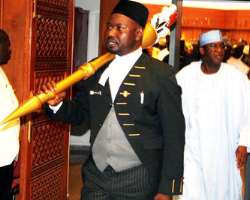 ABUJA-SENATOR David Mark was, yesterday, confident of enjoying a second term as president of the Senate.

Mark's quest was being buoyed by suggestions in Abuja that the present zoning arrangement and the Senate's standing rules on ranking would be upheld in the forthcoming leadership contest.

Vanguard learnt that Mark and his deputy, Senator Ike Ekweremadu, had made contacts with many of the incoming senators even as far back as when they won their nominations to contest the Senate election.

Senators Mark and Ekweremadu, Vanguard gathered, are pitched in battle against powerful outgoing governors who would be entering the Senate next month. Governor Danjuma Goje of Gombe State, it was learnt, is the choice of some senators-elect from the Northeast campaigning for the re-zoning of the office of the Senate president.

There were also suggestions that Governor Bukola Saraki of Kwara State and former Governor Abdullahi Adamu of Nasarawa State who both won election into the Senate were also interested in the office of Senate president.

National Assembly: Senate President David Mark coming out from the Senate chamber after their sitting on Wednesday Photo : Gbemiga Olamikan

Both senators-elect are from Mark's North Central zone. The speculated aspiration of Senator Nuhu Aliyu, a third term senator, was derailed following his failure to win re-election during the last National Assembly election.

The pair who ran as a team in the last leadership election are banking to run together again except there was a dislocation by the zoning arrangement of the Peoples Democracy Party, PDP.

Interestingly, Vanguard learnt that both men had started working on both PDP and opposition party senators-elect even before the elections.

A senator elect from an opposition party who would be a first term senator told Vanguard: 'Ekweremadu wrote me a letter of congratulation after I won my party primaries.'

Another first term senator arriving Abuja, yesterday, spoke of how the Senate president had also been wooing him.

Vanguard gathered that the Mark camp was banking on the ranking rule of the Senate which puts returning senators ahead of fresh senators in the election into principal offices of the Senate and its committees.

The rule as stipulated in Section 97(6) states thus: 'Nomination of senators to serve as principal officers and chairman of committees or on any parliamentary delegation shall be in accordance with the ranking on senators in which member(s) previously elected into the Senate are granted precedence.'

Senate rule
The Senate rule was observed in the breach during the last leadership election when the then National Assembly Clerk, Alhaji Nasiru Arab, allowed the nomination of George Akume, a first term senator in the leadership contest against Mark.

Vanguard learnt, yesterday, that the new leadership of the National Assembly which is going to preside over the election of the Senate president and his deputy; and the Speaker and deputy of the House of Representatives is determined to uphold the rule which would mean a serious obstacle to the speculated ambitions of the outgoing governors.

Meanwhile, the reported agitation by the South East caucus of the House of Representatives for the office of Speaker to be zoned to the region was, yesterday, facing a stiff challenge from the South West caucus of the PDP.

Vanguard learnt that the Southwest PDP caucus was fending off the attacks on the position with emissaries being sent to interested stakeholders in other zones.

The South West zone, it was learnt, is arguing that only the zone has Muslim members that can balance the ticket in the leadership of the National Assembly.

One National Assembly member told Vanguard: 'The South East cannot say that they want Speaker unless they want to say that they are directly against David Mark emerging as Senate president. So it is for balancing that the South West is now being looked up to for the position of Speaker.'

Vanguard was told that two returning members of the House of Representatives from Oyo State said to have met the religious balance that threw up Bankole as Speaker in October 2007 were now under consideration by the South West caucus which, yesterday, was reaching out to the South East for support.

Meanwhile, some returning senators were poised for a meeting this evening to discuss their prospects.

Explaining the rationale for the meeting, a senator who spoke with Vanguard on condition on anonymity said: 'As people with cognate experience, it is important that we keep our eyes on the ball no matter what the party decide. We are doing it in the best interest of the parliament and the country.'

Vanguard gathered that the meetings which have been on going since Monday night would continue today.

It was also gathered that despite the clamour by the North East that the zone should produce the next senate president, some senators are of the view that for the sake of continuity, 'it would be important for people who have experience to lead the senate in order to stabilize the polity.'

260 Reps, 82 senators lose seats
AHEAD of the dissolution of the House of Representatives next month, members, yesterday, commenced moves to reconcile with their emotionally bruised colleagues stripped of their entitlements.

The move came as Speaker Dimeji Bankole lamented that 260 of the 360 Representatives would not be returning for the next assembly.

Speaker of the House Hon. Dimeji Bankole and others coming out of Chamber after their sitting on 03/05/2011-Photo: Gbemiga Olamikan

The estimated 72 mortality rate is comparable to that in the Senate where 82 of the outgoing 109 senators would also not be returning.

Flagging off resumption of sitting after the series of elections, yesterday, Bankole remarked that 260 of the 360 members including himself would not be returning to the House at the beginning of the next session.

He said: 'Only 100 members will be returning to the House from the last elections.' The sombre mood in the House allowed the quick adoption of a motion for the payment of all the entitlements of members of the House of Representatives suspended at the peak of agitations against Speaker Bankole last year.

Bankole condoled 'the families and relations of all those who lost their lives in the unfortunate post-presidential election crisis witnessed in some parts of the country,' adding: 'The House of Representatives is prepared to provide whatever legislative intervention necessary to prevent a recurrence of such political violence.'

The speaker  pledged that the House would redouble efforts to pass outstanding bills into law, before the sixth Assembly rounded off in June, this year, when another session is expected to be sworn in for the seventh Assembly.