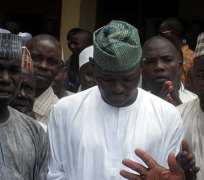 KANO, May 02, (THEWILL) - The family of the former Chief Security Officer (CS0) to Late former military despot, General Sani Abacha, Major Hamza Al-Mustapha have expressed worry and frustrations following reports that the alleged mastermind of the murder of Kudirat Abiola, wife of late Chief MKO Abiola, has been murdered in prison custody.

In a carefully worded press statement made available to THEWILL in Kano today, the spokesman for the family, Alhaji Hadi Mustapha challenged the Federal Government to tell Nigerians the true state of the detainee.

According to Hadi, it has become necessary for the family to draw the attention of the government and all well meaning Nigerians to speculations that Al-Mustapha is no longer alive.

The press statement reads; “I, Alhaji Hadi Al –Mustapha on behalf of the Al-Mustapha family wish to express our profound concern over the rumours making the round that Major Hamza Al-mustapha has been murdered in his custody at the Kirikiri maximum prison.

“For three days running, I have been inundated with several calls from well- wishers and friends as well as other well-meaning Nigerians who want to ascertain the veracity of the truth of the rumour.

“We have made several unsuccessful attempts to get to the root of the matter. Most worrisome about this matter is that it has thrown the entire family who are aware of the fact that there is no smoke without fire, into a state of frustration and apprehension.

“The last time we saw Major Hamza Al-Mustapha was in April when he put up one of his several appearances before a Lagos High court.

“We were already looking forward to his release after his case was closed for lack of witnesses to prove the charges preferred against him.

“Even the Lagos based court of Appeal corroborated this when the Presiding judge ruled that the witnesses that would have proven the charges against him are all unreliable. This revelation that appears to have absolved Major Al-Mustapha who has spent 13 years awaiting trial came to us as a cheering development.

The family also called on human rights organizations both within and outside Nigeria, as well as the Governor of Lagos State to intervene in the interest of peace and justice.

“We are very worried with the turn of events as we have been forced to call for the intervention of human rights organizations in and outside Nigerians first time.

“We thereby elicit the intervention of President Goodluck Jonathan, Governor Babatunde Raji Fashola of Lagos state and relevant authorities to wade into this matter and avail the family and Nigerians the true position of the rumour that has gained so much ground,” the family stated.

However, credible sources inside the Kirikiri Prison located in Apapa, Lagos have told THEWILL that Al-Mustapha is alive and doing well.

“I can tell you that Hamza is healthy, alive and doing well because I have seen him several times today and even saw him this evening (Monday).

“His family is probably trying to seek government’s attention on his issue,” the source said.