NO PLACE FOR VIOLENCE IN ISLAM 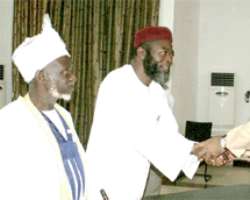 Peace be upon you. Violence has no place in Islam. This is the reminder of the Quran – 'We made a covenant with you, that you shall not shed your blood, nor shall you evict each other from your homes. You agreed and bore witness.' (Quran 2:84) The traits of the believers are reflected in jihad and not in violence as understood from these verses- 'They avoid gross sins and vice, and when angered they forgive.

They respond to their Lord by observing the Contact Prayers (Salat). Their affairs are decided after due consultation among themselves, and from our provisions to them they give (to charity). When gross injustice befalls them, they stand up for their rights. Although the just requital for an injustice is an equivalent retribution, those who pardon and maintain righteousness are rewarded by God. He does not love the unjust.

Certainly, those who stand up for their rights, when injustice befalls them, are not committing any error. The wrong ones are those who treat the people unjustly, and resort to aggression without provocation. These have incurred a painful retribution. Resorting to patience and forgiveness reflects a true strength of character.' (Quran 42:37-43).

Innocent people are victims of violence. Killing innocent people is prohibited and condemned (Quran 17:33; 6:151; 25:68). One such verse states – 'You shall not kill any person – for God has made life sacred – except in the course of justice. If one is killed unjustly, then we give his heir authority to enforce justice. Thus he shall not exceed the limits in avenging the murder; he will be helped.' (Quran 17:33) Suicide bombing, which is part of violence, is also prohibited as understood from this verse – 'O you who believe, do not consume each others properties illicitly – only mutually acceptable transactions are permitted. You shall not kill yourselves. God is Merciful towards you.' (Quran 4:29)

Grossness of murder can be understood from this verse – 'Because of this, we decreed for the Children of Israel that anyone who murders any person who had not committed murder or horrendous crimes, it shall be as if he murdered all the people. And anyone who spares a life, it shall be as if he spared the lives of all the people. Our messengers went to them with clear proofs and revelations, but most of them, after all this, are still transgressing.' (Quran 5:32)

The Quran does not promote fighting but friendship with those who do not fight with believers on religious issues – 'God does not enjoin you from befriending those who do not fight you because of religion, and do not evict you from your homes. You may befriend them and be equitable towards them. God loves the equitable.' (Quran 60:8) The Quran promotes peace and it shows the way to establish the same – 'If they resort to peace, so shall you, and put your trust in God. He is the Hearer, the Omniscient.' (Quran 8:61)

Another verse states – '…Therefore, if they leave you alone, refrain from fighting you, and offer you peace, then God gives you no excuse to fight them' (Quran 4:90) As the part of the peace process, the Quran urges on the polite treatment of captives – 'They donate their favorite food to the poor, the orphan, and the captive. 'We feed you for the sake of God; we expect no reward from you, nor thanks.' (Quran 76:8-9) The Quran teaches us how to treat the non-fighting enemies in their territories – 'If one of the idol worshipers sought safe passage with you, you shall grant him safe passage, so that he can hear the word of God, then send him back to his place of security. That is because they are people who do not know.' (Quran 9:6).

The Quran teaches us to honor covenants with others – 'You shall fulfill your covenant with God when you make such a covenant. You shall not violate the oaths after swearing (by God) to carry them out, for you have made God a guarantor for you. God knows everything you do. Do not be like the knitter who unravels her strong knitting into piles of flimsy yarn. This is your example if you abuse the oaths to take advantage of one another. Whether one group is larger than the other, God thus puts you to the test.

He will surely show you on the Day of Resurrection everything you had disputed.' (Quran 16:91-92) We may need to fight back only when gross injustice is committed, – 'You may fight in the cause of God against those who attack you, but do not aggress. God does not love the aggressors. You may kill those who wage war against you, and you may evict them whence they evicted you. Oppression is worse than murder. Do not fight them at the Sacred Masjid, unless they attack you therein. If they attack you, you may kill them. This is the just retribution for those disbelievers. If they refrain, then God is Forgiver, Most Merciful. You may also fight them to eliminate oppression, and to worship God freely. If they refrain, you shall not aggress; aggression is permitted only against the aggressors.' (Quran 2:190- 193).

Jihad is needed only when peaceful solution fails – 'If it were not for God's support of some people against others, there would be chaos on earth. But God showers His grace upon the people.' (Quran 2:251) The Quran allows to fight only if the terms of the treaty is violated- 'If they violate their oaths after pledging to keep their covenants, and attack your religion, you may fight the leaders of paganism – 'you are no longer bound by your covenant with them – that they may refrain.' (Quran 9':12)

Jihad should be waged only for the cause of God and weak people who were persecuted and oppressed. It is the duty of every believer to support people like these and relieve them from oppression -'those who believe are fighting for the cause of God, while those who disbelieve are fighting for the cause of tyranny. Therefore, you shall fight the devil's allies; the devil's power is nil.' (Quran 4:76) War should be tolerated only to drive away aggression and tyranny – 'Permission is granted to those who are being persecuted, since injustice has befallen them, and God is certainly able to support them.

They were evicted from their homes unjustly, for no reason other than saying, 'Our Lord is God.' If it were not for God's supporting of some people against others, monasteries, churches, synagogues, and masjids – where the name of God is commemorated frequently – would have been destroyed. Absolutely, God supports those who support Him. God is Powerful, Almighty.' (Quran 22:39-40)

Victory should not lead to expansion or dominance but to advocate and establish righteousness – 'They are those who, if we appointed them as rulers on earth, they would establish the Contact Prayers and the obligatory charity, and would advocate righteousness and forbid evil. God is the ultimate ruler.' (Quran 22:41) The ultimate victory belongs to the righteous – 'We reserve the abode of the Hereafter for those who do not seek exaltation on earth, nor corruption. The ultimate victory belongs to the righteous.' (Quran 28:83) Last but not least, this is the important commandment of God – 'You may fight in the cause of God against those who attack you, but do not aggress. God does not love the aggressors.' (Quran 2:190).