You're Not Our Guber Candidate, Ogun CPC Tells Okunniyi 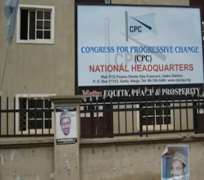 According to a statement signed by its state Publicity Secretary, Chief Bola Adeogun and made available to THEWILL in Abeokuta, the CPC said Okunniyi had at no time, been its governorship candidate.

The party at the end of its Central Working Committee (CWC) meeting on Thursday, said it had taken a stand on the matter, saying that, "we hereby state, in clear terms, that Okunniyi had not been the governorship candidate of our party in Ogun State.

"We also warn that Mr. Wale Okunniyi should stop parading himself as the governorship candidate of our party in the state," the CPC said.

THEWILL tried to get a reaction from Okunniyi but calls to his cell phone did not go through.