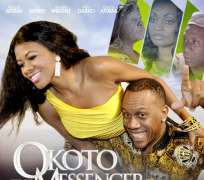 Award winning producer of Okoto the Messager, Pascal Atuma has announced the forthcoming premiere of the movie in hollywood. Atuma is a Pan African Film Festival award winner and UCLA African film honoree

According to a statement sent to gistmaster.com , Okoto the Messenger tells the story of Okoto Igwe (Pascal Atuma) and his girlfriend Angelina(JJ Bunny),both whom were born and raised in Africa, but live in America and are entrenched within the principle “To not forget their roots” thereby operating within the African community in America. Boyfriend and girlfriend, they are a proverbial match made in heaven. They both love to have fun, that is at the expense of “telling it as it is” to their fellow Africans.

Okoto travels to Africa observing the living conditions of his close relatives, as compared to the Africans living and enjoying America as if it is their country, forgetting their loved ones at home. Okoto confronts them all, face to face; CNN style with Angelina in tow…Code named: Operation get your shit together or we will tell it as it is.

Ironically, while Okoto is busy playing moral police and telling others about their wrong doings, he forgets that he is committing the highest abomination in African culture, living with his girlfriend Angelina out of wedlock; not because Angelina doesn't want to get married, but because Okoto is not ready. Drama meets comedy at a crossroad in this film.

Okoto the Messenger is a production of African Entertainment Group in association with Pascal Atuma Productions.