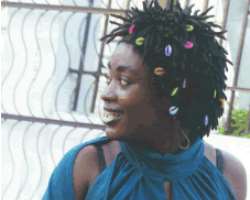 
Help, please!
We really don't get the theme of your style; are you attending a costume party? Nothing stylish here at all, and the shoes are a great contrast. Girlfriend, what really got us worried more was the bra strap and the coats of many colours on your hair. For flagrantly flouting the fashion law, you are fined

N2 million.
Cleavage charge
On March 3 you were nabbed for excessive show of cleavage and it was vividly stated on your charge sheet that you also had your bra straps roaming aimlessly around. With all the authority vested in this court you are to be remanded in Kirikiri Medium Prison until you meet the bail conditions of two sureties from the Catholic Church, two from the Anglican and two from the


Too severe
Girlfriend, your cleavage is too severe for public consumption o! We don't understand if those pairs are actually being auctioned, because that best explains this garbage moment. You are hereby mandated to pay

Double- count charge
We understand these are hard times and sales are really poor. But you really don't need this aggressive marketing, my dear. Exposing your 'oil well and milk factory' simultaneously is punishable under Section 23 subsection 21 of the trendy constitution. You have been declared guilty as charged and the penalty is


Massive weapons
Madam, we have been watching you lately and with evidence to back up our findings, we can authoritatively say that you are a serial boobist. It was neither the first nor the second time you were caught in the act. Considering how you have been flaunting your massive weapons (of destruction?), those mountains would be exhausted very soon. You are to pay a fine of


Lapastrophic!
Big sis, your mini is scandalously short and the way you are seated is not helping matters. We hate to say this, but your laps in this dress looks like a half-squeezed tube of toothpaste. In addition to this, you still went on to squeeze your cleavage into that dress. You need not remind us where babies come from. Abeg, dress your age! You got my jury really angry. Therefore, you

are mandated to pay
N5 million..