NASARAWA: WILL THE OASIS ON THE SAVANNAH IMPLODE? 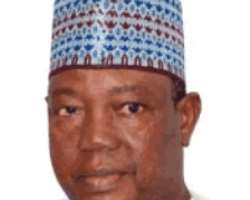 
This is democracy's momentous mid-summer in Nasarawa State, an otherwise innocuous agrarian outpost in the heart of the Middle-Belt of Nigeria, but crucially, one of the country's major cultural crossroads. The build-up to the April 2011 general election in the state could not be more challenging, even foreboding, and this has, inexorably, brought with it a rising tension and expectations.

Could this oasis on the Savannah be about to implode? Or is it not just possible that much of the political hot air currently being spewed forth and about in this hitherto tranquil enclave are the distinct handiwork of political buccaneers and their foot soldiers that are in a desperate search for relevance?

Much of the rising political temperature in Lafia, at the moment, is attributable to the ambition of the business mogul-turned politician, Alhaji Umaru Tanko Al-Makura, gubernatorial candidate of the Congress for Progressive Change (CPC), to upstage the incumbent and candidate of the Peoples Democratic Party (PDP), Alhaji (Dr.) Aliyu Akwe Doma OON, at the forthcoming polls. A former aspirant on the platform of the ruling PDP, Al-Makura, however, never managed to reasonably advance his ambition until he jumped ship and joined the CPC in the face of Governor Doma's towering stature within the PDP fold.

The iconoclast that he is, Al-Makura set out to announce his presence and intentions in a dramatic, if not less than honourable fashion. The mayhem that trailed the nationwide flag-off by President Goodluck Jonathan of his presidential campaign in Lafia at the beginning of February was clearly avoidable, but somehow, it became a defining moment for the CPC candidate, which will probably last him a political lifetime. Yet, the good people of Nasarawa State remain the real issue in the impending poll. This is no doubt a battle like no other, for the very soul of the state.

The towering stature and awe-inspiring profile of the incumbent, Alhaji Aliyu Akwe Doma, built over a long span of service to the people of the state, but even more so on the widely held perception of solid achievements in the past three and a half years, had all but foreclosed the outcome of the gubernatorial nomination contest within the ruling PDP, in the state. On the other hand, the fractious opposition, which for so long seemed incapable of overcoming the polarizing politics that basically sought to manipulate the primordial differences of the diverse social groups that constitute the state, now seem to have regrouped, howbeit loosely under the aegis of the feisty Al-Makura. With barely two weeks to go, it seems safe to assert here that the remaining fringe opposition groups are not in a position to influence the outcome of the polls either way. The poll is therefore, well settled as a two-horse race in the main.

Credited as the 'emancipator' and arguably the founding father of Nasarawa State, Doma championed the struggle of the diverse people of the erstwhile 'lower plateau' for the creation of a state of their own. His claim to re-election and therefore, to a second term in office is necessarily predicated on what is generally rated to be a robust performance in his first term in office. Although, opinions may vary and perceptions differ, it is definitely out of place to make light of, or seek to discountenance the giant strides, which a relatively young and largely rural state like Nasarawa has made under Governor Doma since 2007. The aggressive prosecution of his administration's all-embracing 13-Point Agenda within the limits of the state's narrow resource base is no doubt indicative of a purpose-driven administration committed to making a difference in the lives of the populace.

Alhaji Tanko Al-Makura, like several other candidates running against sitting governors, on the other hand, frames his case against the imperative of change borne out of youthful vigour in the state's polity. Al-Makura, a fiery student leader in his days, comes from the legendary 'Al-Makura' business clan of Lafia and had inherited a thriving family business, which he has grown considerably. He was at different times youth leader of the defunct National Party of Nigeria (NPN) in the Second Republic and a member of the Constituent Assembly that drew up a constitution for the ill-fated Third Republic, but had remained in the main, a businessman. He is not known to have actively participated in the epic political struggle that gave rise to the creation of the state in 1996. This is perhaps, evidence enough that Al-Makura had over the years focused almost entirely on the province of his wide business empire.

Essentially, the CPC flag bearer envisions governance from the point of view of a business model - a terrain he is very much familiar with. He promises a leadership style in which the state government via the bureaucracy (civil service) responds rapidly to the yearnings of the people. He promises as well to eliminate areas of waste in governance, and to transform Lafia into a modern state capital in another four years.

However, even with the best of intentions, much of Al-Makura's postulations remain inchoate, incoherent and devoid of a discernible implementation strategy.

Thus far, he has neglected to put forward a manifesto or campaign blueprint to buttress his candidacy, and on the basis of which he may be assessed vis-Ã -vis his main rival. High-sounding speeches and endless promises of change for its own sake are hardly a substitute to a well-articulated campaign manifesto, by which serious-minded campaign expects to be held accountable. So far, the modest media attention, which Al-Makura has been able to attract to himself, owes much to a stubborn streak that would not just go away. When the chips are down, this will most likely neither translate into votes nor serious evidence of electability. At best, it is stoking the fire of discord the more.

Besides, Al-Makura's candidacy faces an acid test in the unwritten power rotational convention put in place in the state since the advent of the present democratic dispensation. The West senatorial zone (Keffi), having taken its turn for eight years through Abdullahi Adamu, the South senatorial zone (Lafia) is currently in the middle of its 'entitled' eight years through Doma, and the CPC candidate happens to come from the same zone as Doma. Should Al-Makura's ambition materialise therefore, the fear is that it would have serious negative implications for the zoning arrangement. Could the people of the North senatorial zone (Akwanga) possibly stomach it and become spectators in the authoritative allocation of values/resources belonging to the entire state? His ambition fails to answer this all-important question, and this is something that cannot be wished away lightly, as it touches on the fears and aspirations of a significant population of the state.

Old warhorses
Of equal significance in the factors that would likely determine the outcome of the election is the general show of maturity among the leading political lights in the state, most of which belong to the ruling PDP. Unlike most states where the incumbent is steeped in a no-holds-barred war of attrition with their predecessors, Governor Doma and ex-Governor Abdulahi Adamu have shown symbiotic respect for each other over the past four years.

Contrary to expectations in certain quarters, the two old warhorses have been able to manage their differences very well in the overall best interest of the state, by rising above petty political considerations. Thus, instead of moving apart, both men are walking side-by-side going into the 2011 polls. Ditto such other political potentates like Chief Solomon Ewuga, Labaran Maku, and the serving senators, among others. It is therefore, not likely that these veritable weights, who share a common political platform, would sit placidly by and allow another party, not least of all, one led by Gen. Muhammadu Buhari, to overwhelm them at the polls, more so, when some of these notable leaders are on their own, candidates of PDP, vying for various elective positions on its platform.

Howbeit, the political stakes are high as never before, perhaps. Both the domestic and external environments of the impending contest set it apart as a race to watch. The domestic environment draws into the mix a clash of two conflicting visions of the future of the state. It promises to be a defining moment, as the people decide who leads Nasarawa into a new awakening and renaissance, heralding the threshold of a manifest destiny envisaged by its founding fathers.

Religion
More than anything else, the state sits on religious tin box. While mostly Muslim adherents have ruled it since creation, the Christian majority insists they are marginalized and schemed out of everything. A political scientist at the University of Jos, Dr. Kwei Abba, told Sunday Sun that, 'the domination is total, a small percentage of a particular religious group have exclusively seized power and are not letting go. This is causing tension.'

But the Commissioner for Information, Barrister Mamman Al-Fakarrih, counters:

'There is nothing like religious domination here. The state is peaceful and normal co-existence among the various ethnic and religious groups is the norm. Those who whip up religious sentiments do so to score political points and heighten unnecessary tension.' Beneath these contentions are the traditional rulers, who are perceptibly insulated from politics, but usually take positions that could send red signals.

Recently, the emirs were reportedly ordered not to receive the presidential candidate of the CPC, General Muhammadu Buhari (rtd). The directive, inherently laden with explosives, could set the stage for a conflagration. Amidst the various postulations and tendencies, next month's elections, will provide the standpoint for the state's continued unity and stability.