NATIONS CUP QUALIFIER: UCHE BACK WITH A BANG 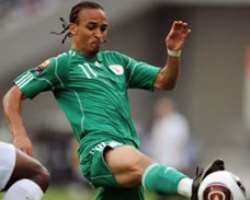 Odemwingie
Super Eagles on Sunday at the National StadiumAbuja rekindled their qualification hopes for the next year's Africa Cup of Nations scheduled for Gabon with a 4-0 convincing win over Antelopes of Ethiopia.

Eagles went straight into business from the blast of the whistle and got the first goal in the first minute through Peter Utaka.

They continued to push for more goals thereafter but could not convert begging chances that came their way.

The visitors proved a hard nut to crack after conceding the opening goal with good leg works and accurate passes that endeared them to Abuja fans.

The fans who thronged the stadium changed their support to the Ethiopians and started booing the Eagles. At the resumption of the second period, Peter Utaka made it two for the Eagles .

Coach Siasia made some changes which saw the introduction of Osaze Odemwingie and Ike Uche.

The introduction of the duo brought life into the Eagles, with Joel Obi sparkling from the midfield.

Uche scored the third and fourth goals to seal the victory for the Siasia-tutored side and put pressure on the Guinea that had earlier played a 1-1 draw against Madagascar in Antananarivo.

With this results, Nigeria now has 6 points, a point behind group leader, Guinea.