AY LIVE RETURNS TO THE BIG STAGE MAY DAY 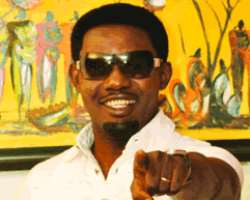 •AY
Fans and followers of the popular Lagos edition of the annual AY Live, are already gearing up for another bumper and exhilarating outing on May 1, globally known as Workers' Day. In fact, the ever-creative and multiple award winning comedian, is poised to organise what he described as 'a mind blowing concert' at the world class 6,000-capacity venue of Eko Hotel and Suites.

The show, which was originally billed to hold on April 24, Easter Sunday, was shifted to May Day. Explaining the new development, AY said the change in date became necessary due to April general elections.  'The May 1 date will enable all class of people especially workers to share in the fun and excitement at the 6,000 capacity venue of Eko Hotel and Suites, since the following day after the show is also a public holiday.'

The outing, which has consistently maintained a major tradition of satisfying the entertainment yearnings of Nigerians went beyond the shores of Nigeria on October 6  and 10 last year, to capacity filled halls at 2 Arena in London and Birdcage in Manchester, with an overwhelming performance by AY who also featured Gordons, Seyi Law, Gandoki, Elenu, Ushbebe, 9ice, and Ikechukwu. The show also incorporated a visible presence of Nollywood through Aki and Pawpaw, Genevieve Nnaji, Chidi Mokeme and Mike Ezuruonye in different comedy skits that attracted over 500,000 viewership within one week of upload on YouTube.

Despite the absence of sponsors, AY, has promised to make the event grandiose, captivating and explosive.  Tickets come in different rates. Regular tickets, VIP tickets and special VVIP tables for five.