How I’ve Coped Without Duro Ladipo For 33 Years - Moremi 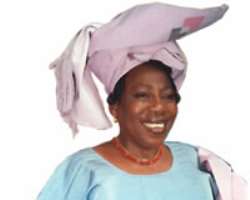 What informed the decision to produce your new movie?

It has been my heart's desire for years to produce a movie, although my late husband and I never produced one. I thank God for the grace to finally do so even though Friday, March 11, was my husband's 33rd year remembrance. Since his death, I've been praying to God to spare my life and raise help so I can realise my dream. I decided to postpone the celebration of my birthday until now in order to combine it with the release of the movie entitled Moremi Ajansoro.

For the 70 years you've been on earth, what would you say life has taught you?

The elders say that experience makes an elder. I have experienced a lot since I got married and after my husband's death. Although God has planned everybody's life, but it's just that He does not give us the opportunity to see tomorrow. I knew what I wanted right from when I was young and that has helped me a lot. Although I never knew that my husband would die so early, I had made up my mind that I would never marry two husbands or give birth to children for two husbands. My husband left me prematurely, so I had the opportunity to live with him for just 11 years after our marriage. I thank God for keeping me till now. I have had death threats many times, yet God has been merciful to me. Imagine a load meant to be carried by two people being carried by one for the past 33 years. In whatever situation a man is passing through on earth, he should hold on to God because human beings cannot do anything; they promise and fail. I enjoin whoever is in this type of situation to believe in God. He's the father of the fatherless and a husband to widows. He will fight their cause. Young women should not only talk about love when in a relationship, but should find out good qualities in the man before making their choices. Spouses don't get to know genuine love until they start living together. Young ladies should also wait to receive parental blessings before settling down.

After your husband's demise, how did you cope with the children's upkeep?

It was not easy. Whenever the children came from school, then, it was always a thing of sorrow for me. I remember an instance after one of my children completed her secondary school education and proceeded to the tertiary institution. She insisted on going further but I pleaded with her to hold on for a while since she wasn't the only one I was catering for. We both wept bitterly because there was nowhere I could turn to. She encouraged me to do all I could because after getting married, she may not have the opportunity to further her education. God raised help at last. As part of my birthday celebrations and in gratitude for all the Lord has done for me, a thanksgiving service has been organised. God says “a thankful heart He would make fat.” The Lord promised He would stand by me and indeed He stood. He loves me so much. A woman must persevere no matter what she is passing through in her matrimonial home.

How do you intend to celebrate your day?

I have been to the Motherless Babies' Home, opposite the University College Hospital (UCH), Ibadan, Oyo State. I have always wanted to do this many years ago, but could not.

You seem to be a fashionable woman, what do you have to say about fashion in today's world?

May God have mercy on us. Charity, they say, begins at home, but not in this generation. I remember back then when I travelled abroad, Nigerians were part of the honoured visitors. The Americans loved to relate with us. I had some of them who asked questions such as the number of days it took me to plait my hair. Fashion starts with our language, Yoruba, which has been replaced by borrowed language and culture. The truth is that Yoruba culture and morals are embedded in the language itself, but when people have substituted its teaching with something else, how would they know about culture and the morals it teaches? Nowadays, children no longer know how to kneel down to greet their parents, instead they bark greetings at them. In our own time, we saw exposure of any part of a lady's body an insult, but in modern times, the unmarried expose their bodies. Unfortunately, such is done in movies too. Youths nowadays do not want to dance to moral music again.

What do you have to say about movies in the past and those produced now?

In the olden days, there was nothing like movies, what we had was theatre. Then, we staged drama that was rich in moral and cultural lessons. We dramatised ancient events about kings and their rulership, although some other groups did comedy. People have requested for such plays into CDs for the benefit of their children. The younger generation, who are into movie production nowadays, think it's all about making money. That is a very big mistake they are making.

What are some of the challenges you faced in the course of the production of your new movie?

There's no other challenge than how to raise the money needed. All the villages we used as locations were paid for. Before, it wasn't s,o but now, they are civilised.

What's the secret of your agility even at your age?

Number one thing is God's grace of good health. Some are blessed with money but good health is the best. Another thing is that I disciplined myself from following men around since the death of my husband. There was a time I was ill and at a point, my doctor advised me to get a man who would make me happy anytime I see him. He diagnosed the illness as loneliness and said that I could not cheat nature as a young woman. I laughed at him because I know that if I marry another man, he would want me to bear children for him and might not allow me take good care of my children.

You live alone. How do you manage chores?

I do all the house chores myself except fetching water and washing clothes. I still go to the market to buy whatever I need and prepare my meals the way I prefer them.

I sing, read my Bible and sleep sometimes because I don't know how to watch television. I purchased a television set so that people would not say I can't afford to buy one and also for the sake of my grandchildren