THE CONTENDERS AND PRETENDERS 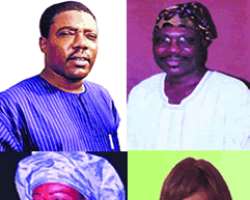 Ganiyu Solomon
He is the incumbent senator representing Lagos West and is contesting for a second term on the platform of the Action Congress of Nigeria (ACN). A strong grassroots politician with a large following, he was the former Council Chairman of Mushin Local Government from 1999 to 2002. In 2003, he contested for the Senate on the platform of ACN, but the ticket was given to Senator Tokunbo Afikuyomi and this irked his supporters who were said to have vehemently protested. He was later 'compensated' by the party when he was given the ticket to represent Mushin Constituency (1) at the Federal House of Representatives and he took over from Moshood Salvador.

In 2007, he contested for the Senate and won and is presently going for a second term. Given his political background, the support he enjoys in his constituency and the fact that the ACN is the ruling party, the odds seems to favour him.

But since his stay at the senate, he has not been very visible in the district. For instance, in Alimosho which is the largest Local Government in that district, he has not been able to attract federal presence that will put an end to the recurring cases of burst pipelines in that area. The burst pipelines has resulted in the contamination of water and he is been accused of not been able to lobby for compensation from the government for his constituents.

Despite the fact that the district has the highest number of votes compared to other districts, he has also not been able to attract much state or federal projects to that area. Another complaint that people have against him is that the GOS foundation which he founded and his constituency office have been restricted to Mushin which is his local government, to the detriment of other local governments in that area.

His strongest contender is Moshood Salvador of the Peoples Democratic Party(PDP).

Moshood Salvador
He is the senatorial candidate for the Peoples Democratic Party (PDP). A former member of the Federal House of Representatives for Mushin Constituency (1) from 1999 to 2003 on the platform of the Alliance for Democracy (AD), Salvador was also a strong member of the Afenifere, a pan Yoruba organization.

He is not depending on the party structure for his victory considering the factions in the state PDP as he has started intensive campaigns for his elections.

Dr. Femi Gbamigboye
Not much is known about him except that he is the Senatorial candidate of the All Progressives Grand Alliance (APGA). His strong point may be that he is the consensus candidate of over 20 political parties who have merged to produce common candidates for the elections. When Daily Sun spoke to APGA's governorship candidate, Dr. Adegbola Dominic on the chances of the party in the state, he said the party was depending on the numerical strength of the Igbos in Lagos, as APGA is seen to be a pro eastern party.

But whether this permutation will work in the party's favour is yet to be seen.

Opadoyin Ishola
He is the senatorial candidate for the Congress for Progressive Change (CPC). Like his counterpart in APGA, not much is known about him as he does not have much grassroots support. His chances cannot be said to be bright when compared to his contenders.

Lagos East Senatorial District
Al'Mustain Abaniwonda
The Senatorial candidate for the PDP, he aspired for the Senate in 1999 on the platform of AD, but on the day before the primaries, he was asked by the leaders of the party to step down for Olorunnibe Mamora, the incumbent senator representing the district.

A former manager of the Standard Trust Bank of Nigeria, he has been in politics since 1993 and has a strong support base in Epe, which is his local government. This attempt will be his second since the inception of democracy. One issue that may work against him is the lack of coordination in the state chapter of the PDP. The factionalization of the party may have contributed to the lack of chesion in the party.

Gbenga Ashafa
He was the permanent secretary in the Lagos State ministry of lands and is seeking to take over from Mamora who is the incumbent Senator representing that district. It is believed that the leadership of the AC N was not comfortable with Mamora's support for Governor Babatunde Fashola during the alleged face off between the latter and Bola Tinubu and felt he should be replaced.

A native of Ibeju-Lekki, Ashafa, whose stint in public office was his position as a permanent secretary cannot be said to be very popular. What may work against him is the issue of acquisition of large portions of land that the government acquired during his tenure which culminated in the AC N's loss of Ibeju-lekki in the House of Reps rerun elections.

Though ACN did not participate in the elections, the natives and residents of Ibeju-lekki withdrew their support for the candidate of AD which ACN was in alliance with. His strength and chances may stem from the fact that ACN is the ruling party which may give him an edge over others and the backing of Tinubu is another determining factor.

Oby Ezennaya
Like her counterpart who is going for Lagos West, not much is known about this senatorial candidate for APGA except that she is a candidate for the party. One of her strong points may stem from the fact that APGA is in coalition with other parties to present a common candidate.

Obayemi Rasaq
For a battle that may turn out to be very fierce, the unpopularity of Rasaq may work against him as he does not have a strong political base or the resources to carry out the campaign. The CPC on whose platform he is contesting is a new party, which does not have a strong structure in the South- West. This further makes his chances slim.

Lagos Central Senatorial District
Remi Tinubu
The wife of the leader of the AC N and former governor, Bola Tinubu, is the initiator of New Era foundation, a non-governmental organization she founded during her reign as the first lady of Lagos State

Her albatross is that she is a product of imposition by the leadership of the party to the detriment of other aspirants.

If she wins, she will be replacing Muniru Muse who joined the Senate in 2007.

Dapo Durosinmi-Etti
A former gubernatorial aspirant on the platform of United Nigeria Congress party(UNCP) and until recently, a leader of the AC N. He has been in the vanguard for Fashola's second term through his group, 'Continuity 2011'. A strong grassroots politician, he enjoys a large following and has used it to work for the AC N. When Remi Tinubu was imposed as the candidate of the party, he defected in protest to the Labour Party (LP) along with his supporters and will be contesting for the same position against her.

His major challenge is that LP is not a very popular party in Lagos, and it is doubtful if he has the wherewithal to carry out intensive campaigns.

Tola Animashaun
In the politics of Lagos, he cannot be said to be popular owing to the fact that he does not have strong political antecedents. Animashaun would contesting the election on the PDP platform. He does not come across as one who has the wherewithal to go into the elections. Observers believe that he might be seeking the financial and moral support of a party chieftain, Jimoh Ibrahim, the chairman of Global Fleet Group to carry out his campaign. What may be a major handicap is the allegation that most of those who contributed to the state chapter of the party in the last elections may not be willing to do so again and this may stall the effective campaigns of the party's candidate.

Yemisi Ransome-Kuti
She is the candidate of the Social Democratic Mega Party (SDMP). Besides, the popularity of the Ransome-Kuti family, not many people know her as she seems to have strong political antecedents. She also seems not have the wherewithal to carry out intensive political campaigns besides the fact that SDMP does not have a strong political structure.