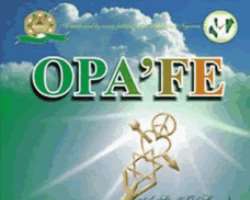 When things go awry, sighs rise up to a din. Not many can stomach anything evil. The birth of Nigeria and its eventual independence from the colonial masters took off on a high note. Five decades after the Union Jack was lowered, it seems the trajectory of progress has taken a low turn.

Hence, it is given to hear the dispassionate tones of disappointed Nigerians remonstrating unend at different fora. For the playwright, gifted with the accoutrements of enactment, dramatizing the socio-political reality is game.

Owolabi Owotunmibi may not ring a bell in the literary world before, but, as Nigeria braced up to mark its 50 years of independence last year, the economist-turned playwright was busy penning a play about Nigeria's journey as a nation-state so far. His play, Opa' Fe, as a tragi-comedy, is a rendering of our national see-saws.

What does the mace of Opa'fe signify? It reflects a symbol of love, a special bond of amity that brings people of different races, customs and traditions together. In this play, the disappearance of Opa'fe has given rise to a myriad of problems, leading to disillusionment among the dwellers.

The play is divided into three parts' The Ancient Age of Unitarea, The Mediaeval Age of Unitarea and The Modern Age of Unitarea. While the first part dwells on the birth and early transformation of the nation of Unitarea (symptomatic of Nigeria), the second part is concerned with the youthful days of the country, while the concluding part shows a nation that has come off age.

In the first part of the book, the major characters bear names that reflect those of late Nigerian nationalists. While Hunter Awo (Obafemi Awolowo) is a Yoruba man, Hunter Abu (Abubakar Tafawa Balewa) is a Hausa, while Hunter Zik (Nnamdi Azikiwe) is an Igbo.

The narrator in the play is an all-knowing one; he sets the tone for the performance and, at intervals, draws attention to unfolding developments, as well as the present state of things.

The three great hunters, who find themselves in the encampment renamed Unitarea, live in love and harmony until the coming of the white man who 'cheated them of Opa'fe – golden symbol of love and the natural prize of peace and unity' (p. 5).

From scene to scene, the three hunters show they can cohere, and everything is done with unity of purpose, though their children don't have the same burning desire as they, which spark the call for them to bring everybody under one roof, because there is a need to build one empire for the people of Unitarea.

The second part of the play has a different cast. Unlike the genuine leaders in the previous part, we now have rulers with dubious intentions. Sadly, rascality has crept into the fabric of society, with mobs staking a claim to national cake. 'We are approaching the Unity House … if any guard comes your way, massacre them. If they face you, face them. Don't be afraid of anyone of them. We must make sure we set that Unity House on fire today!' the Mob Leader choruses to his boys as they embark on a mission to the seat of power.

In the new Unitarea that obtains in the third part of the play, dog-eat-dog has become the order of the day. While those in authority lord it over the masses and loot public treasury, we see youth movements asking questions. The leaders and capitalists we have now are chiefly concerned with personal affairs. To many of them, the downtrodden can go to Hades.

Characters like Billionaire Ezeani, Billioniare Bukunmi, Billionaire Mahmood, among others, who have the wherewithal to engage unemployed youths in the country, are not doing much to ameliorate their suffering. Billionaire Ezeani, aware of this reality, tells his colleagues: 'Every one of us has one or two companies perfectly established in our kingdom. If these companies are established here in our kingdom, these boys will definitely be engaged…' (82).

It has now dawned on all that, unless the stolen Opa'fe is found, peace and unity will not reign in Unitarea. However, there is a happy ending in the book, with the return of Opa'fe, and the people of Unitarea experiencing a turn-around in their lives, while the oppressors begin to experience repercussions.

The play, Opa'fe, leaves us to ponder on what has gone amiss in a nation-state. As the youths of the imaginary Unitarea succeed in bringing their leaders to turn theirs into an egalitarian society, the playwright believes there is hope for Nigeria if our youths too ask the right questions.