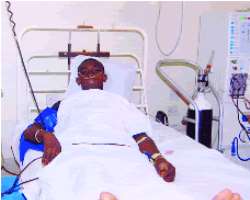 Precious
Twenty-four-year old Precious Innocent has, before now, so hopeful of a shining, bright future. At 22, he had gained admission to read Computer Science at the Michael Okpara University of Agriculture, Umudike, Abia State. Being one of his father's most promising children, his family, especially his father, has been very proud of him as they were sure a golden future awaits him.

But such hope dimmed about a year ago when a life threatening ailment crept into Precious' life.

He suddenly began to feel weak, feverish and dizzy and could no longer concentrate on his studies. He became hypertensive and was soon diagnosed of kidney ailment which could only be cured by transplant in India. The cost of the surgery to keep him alive doesn't come cheap. It is N7m and beyond what the family can easily afford.

Survival of the 200-level student lies in getting N7m for the trip abroad so he can live and realise his lofty dream like every other young man of his age.

His father, Elder Innocent Dedeh, a petty trader, has tried his possible best and spent over N1m to save his son but he is at his wits end and seeking help from compassionate Nigerians. Dedeh pleads: 'I have spent all I can afford since the ailment was diagnosed. After going through three hospitals to find the cause and name of the ailment, it was at the Life Support Hospital that we were told the only solution is to fly Precious abroad for kidney transplant.

'I can't afford funding his treatment. I sincerely disclose to merciful members of the society that I can't provide N7m. Precious' schooling has stopped because he is bed-ridden. I am appealing to Nigerians to come to my aid. Precious has a bright future ahead of him if he survives. His survival is in the hands of God and the good people all over the world who would heed my appeal and cry. I solicit for assistance to rescue his life. He is suffering a great deal right now. He has always been a very humble, easy going and well-reserved young man. He doesn't indulge in activities that could damage his health. Only God knows how this happened to him.'

Apparently making a faint effort to speak, Innocent explained how it all started and said: 'It started last year November. I was vomiting, feeling hot, weak and dizzy. So I reported to the clinic in my school. The diagnoses indicated that I was hypertensive and a later test confirmed that I have having kidney problem. I was given some drugs, and that is what has been keeping me on. It started with hypertension. The doctor told me that because I did not go for regular check up on my IP when I became hypertensive the symptoms persisted and escalated to kidney problem. And he prescribed kidney transplant to be done in India as the only solution. I have stopped schooling as I cannot read nor do any strenuous thing. It has reduced me to idleness. I am no longer as active as I used to be. I have only been relaxing to keep the high pressure low.

I am appealing to Nigerians to please assist me. They should please help me so that I won't end up this way. God will also attend to their needs too.'

The family is calling on kind hearted Nigerians and corporate bodies to help to contact Innocent's father on 08033235492 for further details and directives.