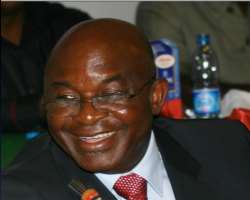 ABUJA, March, 10, (THEWILL) - President of the Senate, Senator David Mark has distanced himself from the alleged shooting of the Benue South Senatorial District candidate of the Action Congress of Nigeria (ACN), General Lawrence Onoja, at Otukpo’Icho, Benue State.

He described the allegation as a ploy by the ACN candidate to win external sympathy.

“Onoja must stop this old trick of assassination attempt by submitting himself to the electorate in Benue South. The serial lies being told by Onoja and his co-travellers have absolutely nothing to do with me or my campaign.

"Neither will that translate to votes for him in Benue South,” Mark said in a statement signed by his Media Adviser, Kola Ologbondiyan in Abuja today.

Mark however called on the Inspector General of Police, Mr. Hafiz Ringim, to begin a full investigation into the allegation by the Benue South Senatorial Candidate of the Action Congress of Nigeria (ACN) that he was shot by gunmen in Otukpo’Icho, Benue State on Tuesday.

According to the President of the Senate, “the majority of the Peoples Democratic Party (PDP) members from Benue South were in Agatu as well as Apa Local Government for the campaign of Governor Gabriel Suswam when the incident reportedly happened.

“We do not want to pre-empt whatever investigation the Police is conducting. But whatever they (Police) are doing should be carried out quickly to enable the public know the truth.

“There are several questions that Onoja has to answer over these alleged shooting at Otukpo’Icho and that is why he is singing different tunes to different newspapers on the alleged attack. That is why I urge the Police to conduct its investigation and make the report public.

“If indeed Onoja was shot and treated for gunshot injury at the Nazareth Hospital, Otukpo, the Police must apprehend those behind such an act but if the allegation is found to be baseless, we also expect the police to carry out its responsibility.

“I am aware that the PDP has conducted its rallies peacefully in the state and particularly in Benue South.

“We also expect the opposition parties to come out and conduct their own campaign in an atmosphere of peace,” the statement said.

Mark urged his supporters to remain calm even as they continue their door-to-door campaign for all the candidates of Peoples Democratic Party (PDP).