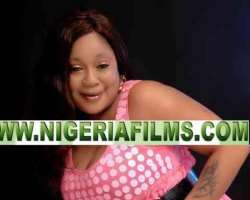 ...plot to 'relive' critical illness in a new flick.

In a couple of days popular actress, Tayo Odueke ( widely known as Sikiratu Sindodo) should be up and about her everyday engagements.

And according to those who should know, if expectations

work out according to plans, the celebrated actress should be spotted at locations here and there - including that of a flick that is planned to 'relive' the horrific experience of the illness that resulted in the death scare that recently enveloped her.

Sources attribute this development to the current state of her health.

She is said to be well past all manner of health threats that recently ravaged her being.

According to a confidante 'she is very much okay now, it is just for her to add a bit of weight and regain her strength. That is what she is working on now'

Investigations revealed that the much loved actress is striving to achieve this goal at her parent's home in Surulere, Lagos.

She moved there after she was certified well enough to go home by Doctors at the Lagos State University Teaching Hospital (LUTH).

She was reportedly treated for a complicated case of Typhoid Fever and Ulcer that has left her greatly emaciated and financially drained.

Findings revealed that contrary to speculations in several quarters that colleagues and associates did not show any financial consideration to her in her hour of need. Neither did former Lagos First Lady Remi Tinubu made any official contact to help her out.

Even her estranged deep-pocket husband and transport boss, Musiliu Akinsanmi was listed as nowhere to be found all through her period of travails.

Insiders insist the busty actress took care of her medical bills with help from family members.

At a point she was said to be forced to stay at LUTH extra days after she was discharged while very close family members sourced for funds to pay off extra fees.

According to a source 'the best the ANTP did was to send a delegation led by movie director Abbey Lanre to come see her at the hospital once and others went about extending hands of help in a manner that would had been akin to her begging for money from them!'

Further investigations revealed that the actress might still have cause to smile from the harrowing experience that left her bedridden for weeks.

Talks are said to be on to make her 'relive' all she went through in a new movie.

Insiders maintained she appears receptive to the idea of the production that is expected to centre on all she went through on the sick bed and outside of it and the remote and immediate cause of her experience along with the inherent lessons.

If things work out, the yet to be titled movie will be one of the few first productions that will mark her return back to work.

Explaining why the popular actress has shy away from media interview of late, insiders credit the development to decree by her parents.

They are said to be angry at the manner the clarifications she attempted to make earlier in the illness saga were distorted in certain reports. The actress's parents reportedly claimed most of the reports did more of harm than good- hence a decree that no media engagement will be honour in their home again on issues relating to their child's health.