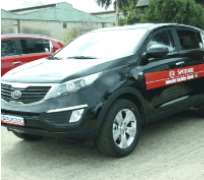 Since its very fast appearance at the 2007 Detroit Auto Show, the latest (2011) model of the popular Sportage, Kia's innovative urban crossover utility vehicle (CUV), had kept quite a lot of its admirers waiting eagerly for its availability in dealership showrooms.

And following the official unveiling in many Asian, European and American countries, in 2010, the waiting continued in Nigeria till last month when Dana Motors fulfilled its promise of introducing the vehicle into the Nigerian market within this first quarter of .

Recently, Dana Motors, through the General Manager, Mohan Sethi and the Marketing Manager, Melissa Lewis, presented the new Sportage to the motoring Press in Lagos, where it was discovered that the vehicle has benefited considerably from the manufacturer's completely new style concept, which features a longer body shell, lowered height and broader width. Lewis, who thrilled the guests with a clear power-point presentation of the vehicle, described it as dynamic, with some characteristics that stand it out from the competition.

Kia's striking new family look grille design is evident in the new Sportage, so are the black hezel and LED lamps of the headlamp cluster, all of which add to the SUV's sporty and high-tech image. This look is further enhanced by the unique C-pillar and sleek roofline, especially when viewed from the side.

From the rear, it is still typically Sportage, while the same sporty and hi-tech images achieved by the LED rear lamps are remarkable. Other features to note at the rear are the maximized tailgate glass opening area and the two-tone bumper that protects the surface from pollution. A brief test-drive by members of the motoring Press from Isolo to Mile 2 and back, provided an opportunity to task both the automatic and manual versions of the 2.0 litre engine (the 2.4 litre engine is currently not available, according to Dana Motors Officials).

Driving the Sportage through the rough patches and craters (not pot-holes anymore) on the Cele stretch of the road to Mile truly engaged the independent suspension system, and the ride was as agile as possible, which confirms the manufacturer's claim of good performance on both smoothly surface highways and rough terrains.

The air-conditioned interior, the refined horizontal dashboard with sportier instrument panel, the driver's ventilated seat, six-speaker CD/Radio sound system (with MP3, ipod and USB connectivity, plus audio remote control) and the lulling leather seats, made the test-driver real fun. One couldn't help noticing the provisions made for the driver's convenience and comfort, and they include an array of buttons for the control of many functions like the music system. There are also a glove box, an in-door panel, centre console, sunglass case and Bluetooth option, among others.

Outstanding among the array of active and passive safety features incorporated into the 2011 Sportage is a package of six airbags. Others worth mentioning are ABS (anti-lock braking system), ESC (or electronic stability control), downhill brake control and hill-start assist control, as well as rear parking assistance system and ECM (electro-chromic rear view mirror, which dims the reflection of a headlight from a vehicle behind).

Not a few of the guests were impressed when Sethi disclosed that at N3.96 million (manual transmission) and N4.5 million for the automatic gear, 'the new Sportage is already sold out'; meaning that all the 65 units that made up the first batch had quickly left the showrooms as soon as they arrived.

He admitted that getting enough shipment from the Kia Motors Corporation plant is not easy, 'but whatever we are getting are being absorbed by the market'..