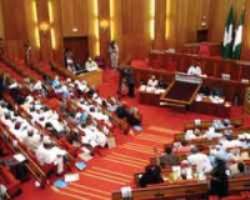 ANY further withdrawal from the controversial Excess Crude Oil Funds by the Executive arm of government may no longer be tolerated by the Senate, which yesterday described its existence as alien to Nigeria's Constitution.

To the operators and beneficiaries of the account, the Senate directed them to await the passage of the Sovereign Wealth Bill currently before the National Assembly, which spells out the usage of such monies.

The Senate also hinted yesterday that it would push for the use of the excess crude funds to execute the 2011 budget and frowned at the budget envelopes given to the ministries and parastatals by the Budget Office.

Commenting on the operation of the excess crude account during a budget defence session with officials of the Ministry of Information and Communications, led by the minister, Labaran Maku, the Chairman of the Senate Committee on Information and Communications, Ayogu Eze, said instead of allowing the tiers of government to continue to operate the illegal account, the funds should be used to execute the budget so that Nigerians could enjoy the dividends of democracy.

The account was created by the administration of former President Olusegun Obasanjo, from where funds above the budget benchmark due to the rise in oil prices in the international market were saved for sharing by the three tiers of government.

But Eze told the beneficiaries of the excess funds yesterday to wait for the Sovereign Wealth Bill to be passed before they operate the account again. He said Nigerians were yearning for the dividends of democracy and their representatives in the National Assembly would do all that was necessary, including using the excess crude account to improve on their well-being.

'Those who are operating the excess crude account should wait for the Sovereign Wealth Bill to be passed. The excess crude account, as it is today, flouts the Constitution. It is illegal to keep money in an account that is unknown to the Constitution. Our people are yearning for democracy dividends and that is what we are here to give them. That money belongs to the people of this country and we should use it to deliver the dividends of democracy to them,' he insisted.

The committee also frowned at the provision of budget envelopes for ministries and parastatals by the Budget Office. It said the 'mandate given to the National Assembly by Nigerians is not to be teleguided by any budget envelope when the chunk of money is kept in an illegal account.'

According to the panel's members, the Budget Office does not have knowledge of the needs of the people like their representatives at all levels.

'It is not a healthy practice that the budget is restricted to the Budget Office of the Executive arm of government, which is either issuing envelopes or ceiling. Our mandate is not to come and accept budget envelopes. The committees are here to scrutinise the needs of the ministries and apply what is just and not to be teleguided. We will do our work based on the reality on the ground and what we think is good for the people of this country. We are in a better position to decide what the budget should be,' the panel declared.

Presenting the ministry's budget, Maku said it had a ceiling of N1.8 billion, which was later reduced to N1.4 billion. He also said the capital vote presented by the ministry was equally reduced. He, however, justified the reduction of the budget by the Presidency, noting that the country was going through hard time, which required sacrifice on the part of everybody.

Maku warned against preparing budgets based on the rise in the price of oil owing to the crisis in the Middle-East, stressing that projections should be modest so that when the oil price falls, Nigeria would not be caught unaware.

'There are shocks in the oil market. Sometimes the price rises and sometimes, it goes down very low. The wisdom of the Executive branch is that we should be modest in our projections and that is the right thing to do now. There is an increase in salaries and this will jack up the wage bill. We are taking into account emerging challenges,' he said.

Maku explained that as part of efforts to make the country one of the most developed economies of the world in 2020, the government would soon embark on awareness campaign to make all Nigerians identify with the vision. 'The Federal Executive Council (FEC) has taken a decision that from this year onwards, we should show greater commitment and sensitivity to the Vision 20:2020 and as a government, we have been conducting seminars for budget units, parastatals and implementing agencies to be sure that we factor into whatever we are going to do between now and 2020 into the national plan.

'When I talk of supplementary budget, our ministry also has the responsibility to incorporate into our plan the mass public education for Vision 20:2020 plan, because it's not all about government budgeting, that plan is about what citizens will do in the private sector, the community, the non-governmental organisations, what is the implication for the various sectors of the society outside government? I believe that has not been adequately realised.'