Men listen when I talk – Uri 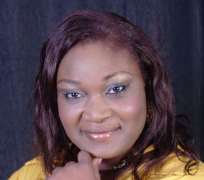 Uri Ukoha Kalu talks tough, works hard at her job and tells everyone who cares to listen, that the real woman is the one who has what it takes to make the men listen.

A former banker turned radio/Tv content provider, Uri has come a long way from her early days when she made her debut with A-Z, one of the nation's first Tv reality show.

A human interest programme that focused on some serious African issues, A-Z was hailed for its creativity and content.

Uri takes us through her world while sharing a new dream her company, April Benjamin and Dawn has for the entertainment industry.

Every thing looks new here, What is going on?

Everything is new except the company. We are nine years old and we've been working behind the scene because we believe we need to have a lot of content.

We are media service and content providers but you could call us independent radio and television providers since we've had so many programmes on radio and TV. But beyond that we've also done a lot of public relations and advertising, so we are bringing everything under one umbrella because they all have to do with one media.

The company is concept based. We are very creative and believe nobody has the exclusive right to creativity and we are putting all that into our approach to our media matters and clients. That is what is going on here.

Can we have a run down of some of the jobs you have successfully executed?

We have presenters who present in different languages depending on what the client wants. We also have campaigns running for some parastatals and the government. Our programmes are specially designed for specific clients.

We produce business reports on different radio stations, at some point we produced legal products when we were working for the Lagos State Ministry of Justice and the office for the Public Defender.

Beyond that we were there when Guinness wanted to relaunch Malta Guinness. We produced the first reality programme A-Z, a human interest programme featuring some serious African issues. We get someone who has a problem like 'rape' tell us his/her story on the show, while actors and actresses sort of re-creat the experience so that you can identify with the emotions of the show. In recreating some of the scenes, we try not to use popular faces as casts.

The drama is for 15minutes and in the remaining 15minutes there are professionals who examine the issue raised in the drama and proffer solutions. Its being rested for a while but we are cooking it up again.

And what are the plans for the entertainment industry?

Beyond the glamour, awards and shows, one could get the stars one on one to celebrate them. You could single one or two of them out and before a small audience have them listen to their own music and have the crowd respond and interact with the star. The ambience of acceptance can enhance reportage.

Is that what you are trying to do with Jay Martins?

Yes, that is what we are trying to do. We are trying to celebrate him with a lovely cocktail, a few people coming together to listen to his music, of course he will bring his friends too but he will be the focus.

So how does that benefit him?

Its going to get him to remain focused, also a feel of acceptance. The selection of crowd will add a lot to his confidence.

When he is on stage, he can't talk to his fans so he cant feel them. All he hears is shouting and cheering but in a cocktail, he can interact with them and have more ideas on maybe how to repackage the next song or so. it's a feedback system.

Have you faced any challenges because of your gender?

I don't think I've had any problem in that regard. In fact I must say that contrary to what people believe, I am in an industry where men listen when I talk. When you make sense, men will listen when they know you have content, but when you don't they stop listening and start looking.