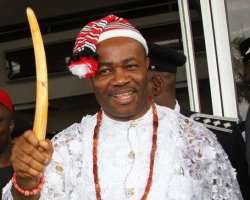 From: Concerned Citizen of Akwa Ibom State (Nigeria) in USA

Mr. President and Commander in Chief of the US Armed Forces, Sir, We the People send this letter to you being aware of the voice and stand of the United States government on issues relating to Democracy, Liberty and the Pursuit of Happiness, Human Rights and Social Justice.

We are Citizens of the United States of America, and we fervently believe that you will hearken to our cry for justice.

From Tunisia to Egypt, from Yemen to Bahrain, even right here in Madison Wisconsin, the world has witnessed the People stand up against governments and political leaders that suppress individual liberties and subvert the will of citizenry. Every individual yearn deep inside for freedom and security.

The past four years have been emotionally difficult for our native country Nigeria and some of her states.

Murders, assassinations, rapes, kidnappings, and political intimidations in Akwa Ibom State of Nigeria (our native homeland) have been relentless and troubling.

…"
Is typical headline news.
"…The insecurity in Akwa Ibom State worsened in the past few days as a Legal Practitioner and human rights activist, Barr. Udo George was kidnapped at gunpoint in his Ofot Ukwa chambers in Uyo, the state capital..."

"…George is an outspoken activist who has resisted efforts by the Governor Akpabio-led government to impose a candidate on the vacant traditional chieftaincy stool of Oku Ibom 3. It was left vacant when the Paramount Ruler of Nsit Ibom LGA, Chief James Obot was assassinated in his Palace a few weeks ago by yet to be apprehended gunmen..."

"…Kidnappings and political killings have become the order of the day in Akwa Ibom, heightening insecurity in the oil-rich state which paradoxically ranks among states with the highest poverty rates. Even indigenes that are outside the state are now afraid to go there to see relatives or conduct business..."

We have lost loved ones, friends, neighbors, and acquaintances in this pervading reign of terrorism. For those of us resident in the Diaspora, the hurt, fear, and despair permeates our psyche due to our collective believe in the unalienable right to life, liberty, and the pursuit of happiness. This reign of terror and insecurity offends our sense of morality and our core belief in the role of government as a guarantor of public safety for her citizens.

Akwa Ibom State is in the Niger Delta region of Nigeria where the Ibibio, Annang, Oron, Eket, and Ibeno are the resident ethnic groups.

The Ibibios are the most populous indigenous inhabitants in the state and possibly in the Niger Delta.

When combined together including the Efiks dialectic community, the group constitutes the fourth largest ethnic group in Nigeria.

The Census of 2006 puts the population of the State at nearly 5 million. Since the early 1960s, when Shell (Anglo/Dutch) began oil exploration in Nigeria, hydrocarbon has become the main stay of Nigeria's economy. In 1970, Mobil Producing began oil production off the coast of Akwa Ibom State. The State is now the largest oil producing area in Nigeria.

This concerning scourge of insecurity and lawlessness in Akwa Ibom State of Nigeria has not exempted expatriate oil workers and contractors from the USA, France, Britain etc.

Whereas the US Department of State has on its website posted warnings on this perilous security concern in Nigeria's Niger Delta and Akwa Ibom State in particular (http://travel.state.gov/travel/cis_pa_tw/cis/cis_987.html#safety),

the kidnappings, assassinations, and reign of terror are now approaching genocidal levels.

As your constituents who still have strong family ties in Akwa Ibom State of Nigeria, we respectfully request your assistance in applying pressure, through appropriate channels, on the government of Nigeria to bring reprieve to the people of Akwa Ibom State in this appalling case of insecurity.

Declaration of a State of Emergency for Akwa Ibom State by the Federal government of Nigeria is long over due.

Current conditions not only make life and living perilous, but threaten the flow of petroleum out of the Niger Delta.

The political dimension:
In Akwa Ibom State Nigeria, innocent citizens are regularly harassed for not being politically aligned and supportive of the State Governor Godswill Obot Akpabio.

Citizens are kidnapped simply for supporting opposition candidates. Citizens are barred from contesting elections for office of governor.

For daring to declare such intentions, persons are meted with deadly attacks and relatives kidnapped and/or murdered.

Some that have dared to question actions of government have been arrested and incarcerated without cause on the orders of Governor Godswill Obot Akpabio.

The mere public challenge of government inaction to assure citizens public safety will earn you the trumped up charge of treason; and as we write this day, Doctors' salaries have been stopped by government for daring to strike in opposition to the kidnapping of Dr. Menfin Ekpo, a member of the Nigerian Medical Association.

So many of these kidnappings and assassinations are carried out inside the church during Sunday Services, where people have gone to worship, pray and thank God for blessings and infinite mercies.

In Akwa Ibom State of Nigeria, no place is sacred or safe any more.

The government of Akwa Ibom State of Nigeria goes to the extent of using the services of the Police and State Security Services, along with a paramilitary group called "ADUMA" to intimidate, harass, and arbitrarily arrest innocent citizens.

The Governor of Akwa Ibom State of Nigeria admits (in a news interview) operating a crime syndicate called "Peace House", ostensibly for gathering and furnishing information on security matters to the government. http://www.tellng.com/ContentDisplay.aspx?page_id=31&id=28

Yet, Governor Godswill Akpabio's own (former) State Security attaché (Prince Ikim) has gone public (through his Legal Counsel) in petitioning the Nigerian Presidency and National Security agencies to the effect that the "Peace House" is operated by persons responsible for murders and kidnappings (operators allegedly include the Governor as sponsor, a Commissioner of Public Works Don Etim, and the Governor's Cousin Ibanga Akpabio – a part time resident of Atlanta, United States of America).

The citizens live in palpable fear, and speak in whispers. Freedom of speech and of the press is suppressed.

State TV and Newspaper have become propaganda tools. We pray God to take away this cup from Akwa Ibom State.

Governor Godswill Obot Akpabio blames those that speak up against injustice, human rights abuse, and repression as insulting and belittling Akwa Ibom State of Nigeria.

Governor Godswill Obot Akpabio accuses those in opposition or any dissenting voice as giving Akwa Ibom State a bad name.

Not withstanding the fact that it is only, and only the deeds, behaviors, and relationships of the state government that breed each and every dissenting voice.

You must die or rot in jail for daring!
These are the beginnings, the genesis of the Idi Amins, the Hosni Mubaracks, the Hitlers, and every ruler that kills, maims, kidnaps, and imprisons the very citizens whom they swore to serve.

This, regrettably, is the nature and manifestations of Godswill Obot Akpabio, the sitting Executive Governor of Akwa Ibom State.

Some will say: look, look at the roads he has rehabilitated. Others may point to the pomp and fan fare around Governor Godswill Obot Akpabio's declarations on "Free and Compulsory Education" and "Free medical care for the elderly and children" though the schools and hospitals are sub standard, dilapidated, and in shambles.

But for every seaming good deed, is an abundance of out right criminal activities and blatant acts of repression by the government of Governor Godswill Obot Akpabio.

We the Concerned Citizens of Akwa Ibom State can no longer overlook the urgency of the moment as we do not believe that the bank of justice is bankrupt.

We therefore call on you who represent a voice, as the leader of the free world that cherish freedom, democracy, good governance, and respect for the sanctity of life, to help us in condemning and stopping this evil.

Political assassinations, kidnappings, political imprisonments with trumped up charges, child rights neglect, persecution of human rights activists; these evil deeds must be brought to an end in Akwa Ibom State of Nigeria. No quest for development or political office warrant nor justify these deeds.

Public safety, jobs, and good governance must be enabled in Akwa Ibom State of Nigeria. This is our prayer, this is our desire, and this is what we want your help and enabling voice and influence on.

You share in that profound knowledge: “all that is needed for evil to prevail is for good men and women to do nothing".

Please, we need you to speak out against these killings.

Call President Goodluck Jonathan of Nigeria; tell him that there is evil in Akwa Ibom State of Nigeria under the reign of Governor Godswill Obot Akpabio.

We need free and fair elections in Nigeria and Akwa Ibom State. We need the right of Nigerians in the Diaspora to vote in Nigeria's National elections at Nigeria Embassies and Consulates.

A call for peaceful solidarity demonstration has been made; we call on all to answer. Centers have been set in Uyo - Akwa Ibom State, Washington DC – Capitol Hill, New York – The UN, Atlanta –The King Center, London, and Houston – Houston City Hall Downtown.

The demonstration event date is Saturday February 26, 2011 at Noon.

Yours Faithfully,
Obong Umana
For Concerned Citizens of Akwa Ibom State of Nigeria.

Following is the list of victims of crimes as At February 16, 2011:

2) Dr. Chris Ekong, accused of killing the Ekpenyong brothers. (Record shows he was in South Africa when the murder took place) (Ibibio)

3) Mr. Davidson Uboh substituted for the real killers of Ekpenyong brothers who were let out of jail. (Ibibio)

5) Mr. Itoro William substituted for the real killers of the Ekpenyong brothers

8) Amb.Sam Edem falsely accused of stealing and charming the governor- acquitted by a judge (Ibibio)