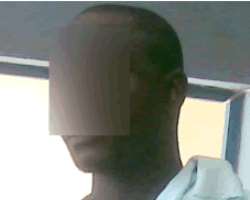 •Suspect
Chukwuemeka Emenike has concluded plans to wed in March this year. Before the much-awaited ceremony, the businessman, from Isikwuato in Abia State, decided to rent a mini flat, at least, for their convenience.

The young man, who was desperate to secure an accommodation, paid N600, 000, to an estate developer, Olatunde Najeem, who pocketed his money and denied him the apartment.

Till date, he has no house and still finding it difficult to recover his money, even as the March wedding is around the corner. The victim is still stuck in limbo.

On her part, the rent of where Mrs. Mary Sunday lived was to expire in April 2010. But considering the number of people living (eight) in a room and parlour apartment, she felt they needed a new, spacious accommodation. She reasoned that instead of paying her former landlord, it was better to add up to the money she had and rent a 'comfortable' apartment.

One day, her daughter, Philomena Fashola, was said to be passing through Akpri Street, Olodi, Apapa, Lagos, when she saw a notice board, where vacant flats and shops in a building under construction at No. 38 were advertised and decided to make inquiries. After discussing with Najeem, a deal was struck and Mrs. Sunday and her daughter paid N896, 000, to him. As at press time, no flat, no shop and no refund of her money. Unfortunately, she was evicted from her former apartment last year and they have been living in the church.

The stories of Emenike and Mrs. Sunday are not too different from other 49 victims. All of them have tales of woes to tell concerning the alleged scam. The 51 victims were allegedly fleeced a total sum of N16, 999,000, by the suspect. Another businessman, Philip Onoka, was swindled N100, 000. Like other victims, after seeing the advertisement, he contacted the suspect, who operates with the business name, 'Deen Property Consultant,' and he assured him he was going to occupy the shop in four months time after payment.

'When I went to see him, he asked me to bear with him and to give him some time to complete the construction work. I went there after two months and the story remained the same.

'I told him I was no longer interested in the apartment and asked him to refund my money but he promised to compensate me. I also went to him in January 2011, only to see some people fighting in front of the building.

He explained that after sometime, Najeem called some people on phone, asking them to start packing into their flats and shops. But when information circulated that some people had started packing in, others who paid money for the same purpose also stormed the area. And there was chaos!

The problem of who occupies which apartment became a very serious issue, as they fought one another, broke doors and replaced the keys. Daily Sun gathered that the confusion continued, until the victims came to their senses and realised that there was no need fighting one another but a common enemy- the estate developer.

'If you fix a key on the door of your supposedly flat or shop, another person would remove it the next day and fix his or her own. About eight persons were laying claims to one shop or flat,' Onoka revealed.

And when they tendered the receipts issued to them by the suspect, to support their claims, they (receipts) bore different office addresses. Some read, 'Afenifere Iron Market, Line 2 Shop 144 Badagry Expressway, Orile Iganmu, Lagos,' while others have 'Ebute Ero,' as the head- office. When the situation became volatile and uncontrollable, Najeem disappeared into thin air and cut the communication between him and the victims.

'At the initial stage, he was answering our phone calls and later stopped. On January 31, 2010, we got information that someone wrote a petition against him, to the Special Fraud Unit (SFU), Milverton Road, Ikoyi, Lagos. He was invited and detained there,' he said. Emenike narrated to Daily Sun how he paid N600, 000, in December 12, 2010 and was assured of getting keys to his mini-flat on December 28.

He said: 'I called him on phone on December 28, and he told me he was unable to complete the construction work and gave me a new date, which was January 7. After January 7, he shifted it to 14, and later, 27.'

According to him, when he went to the site, he met seven families laying claims to his apartment.

'I called Najeem on phone and told him my wedding was coming up in March 2011, and informed him it was because of it that I paid for the flat. He switched off his phone. It was in a bid to get the accommodation that I paid the money at once, which included agreement and agent fees.' He disclosed that it got to a point, when some boys living in the area came there and drove away all the victims.

'We contacted his brother on phone and he visited the place to see things for himself. He called Najeem on phone but another person picked the call and said he was at the Special Fraud Unit. That was on January 27. I need my money now, I don't want the house again,' he insisted. He explained that many of the victims had already told their landlords that they were leaving, while some had already leftt, in anticipation that they were going to be given accommodation by Najeem, having paid for same.

His claim was corroborated by Philomena. She deposited N210, 000, while her mother, Mary, paid N596, 000, for shop and flat, respectively. After depositing the money in April 2010, she and her mother were promised that they would pack in by July 2010. She explained that when she went to see Najeem in July, she discovered that he did not fix the doors, windows, among others, as he earlier promised.

'He told me the land where the building was erected was in dispute, and begged me to give him till August. In August, the house was still not ready and he again pleaded with me to be patient till September. 'My mom even asked him if she could pay extra amount of money in order to secure the accommodation, because we have been living in the church. We left where we were living because of the new house we paid for.

'We are eight people living in our old apartment. The developer also knows that we are still sleeping in the church,' she said.

She narrated how her landlord gave her quit notice, which according to her, expired December 31, 2010. 'We don't know what to do now,' she lamented. The jobless graduate, who said it was her in-law who gave her the money, told Daily Sun she had also lost interest and appealed to the suspect to refund her money.

Meanwhile the victims have written joint petition to the Economic and Financial Crimes Commission (EFCC).

In the petition, dated January 28, 2011, names of the victims and the amount of money collected from each of them were listed. They appealed to the Chairman of EFCC, Mrs. Farida Waziri, to investigate the matter, as many of them are now homeless and want their money back.

However, the suspect has been arraigned at Magistrate Court 5, Igbosere, Lagos. But the victims are alleging that one Omotayo, presented in court by the police, as a victim ,is not one of them.

He was also said to be absent in courtwhen the matter came up for mention.