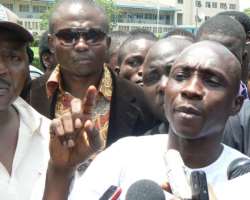 About 2months to a year remembrance of Olaonipekun Olaitan popularly known as Dagrin who lost his life in a ghastly motor accident April 22nd, 2010, His father comrade Olaonipekun a.k.a Bob Neil has vowed to pick up fight with the faceless individuals that use in his son mishap to enrich their pocket.

He explained that apart from the fact that so many concerts has being organized in the past in Dagrin's name without receiving proceeds from it, some marketers also released some of his past works without permission not to talk of remitting money into the family account. Among the culprits he made mention is the Ace producer “SHEYMAN” who he said have not fulfill all his promises to the family in respect of the proceeds generated from the {ALL STARS TRIBUTE) in honor of the deceased.

Comrade Olaonipekun has vowed to pick a fight in a legal way with all those that exploited them immediately after the one year anniversary of late Dagrin.