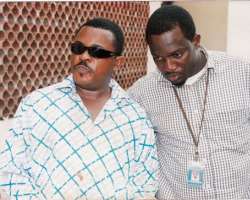 Taiwo OdualaTaiwo Oduala is a Nigerian movie director with many movies to his credit. Born on 10th of March, this young movie boss who has directed top Nollywood actors and actresses in various movies likes choosing his locations from around the world. He has taken top Nollywood stars to Ghana, South Africa, Greece, The Netherlands, etc., either to shoot movies or to attend various film related festivals.

The easy going and ever smiling film boss has a degree in sociology from the Lagos state university and is a part-time politician.

I am Taiwo Oduala, a film maker from Nigeria, a film director & producer. Also an actor.

When did you start your Movie directing Career?

I started aiming to be a director from 1991, and has made many effort till I got my breakthrough as a bona-fide director from 1997 with my first film that I also produced, titled: the future Adams, which lasted till 1998. So I'll say my directing carrier started from 1997.

Why do you choose to be a director instead of an Actor?

I was an actor too at the initial stage, and till now I sometimes act, but you see my dream was to be a director because I found out that directors are well respected and are those that interpret scripts, moreover directing is what I am called for.

Having directed many movies, which movie is the most difficult you have ever directed?

Almost all my movies are challenging, due to the fact that I gave high visual interpretations and had less equipments & accessories to work with. But I will still give it to “UNDERTAKERS”, which was shot in 2009. It had a lot of cast, effects and all story happened in the night 9pm till 7am. All at one location. That was really tasking.

Which actors or actresses do you love working with?

I love working with any actor or actress, I don't have exceptions.

I heard that most stars do misbehaves on set, how do you react in such cases?

Yes, some actors & actresses do misbehave some-times, but it depends on the director. I am much of a disciplined director, nice but strict when it comes to professionalism. So when artistes hear that I'm on set, they wish to work with me, and they are all well behaved.

Do you see yourself as a good director?

Well… my works speaks for me, I have gotten so many recommendations & sure I know the ethics of directing, so there's no other word than GOOD, SURE.. I AM VERY GOOD.

Do you see the movies you directed meeting up to International standard?

Yes, I have directed so many outstanding and international standard jobs.

I heard that most people prefer to shoot their movies in Ghana, have you ever directed movies abroad (I mean outside Nigeria)?

There was condition then that made many Nigerians go to shoot in Ghana, but now most films are being shot in Nigeria. They rather bring the Ghanaians to work in Nigeria, and the main purpose is to have an additional market in Ghana.

Yes, I have directed in Ghana, south Africa, Greece, Holland, etc. and have worked with more professional crews, mostly the whites.

Last year, Stephanie Okereke, wrote and produced a movie “Through the Glass”? Being in the business for long time, how would you describe her job?

Taiwo OdualaStephanie okereke's job was a good effort. It was a nice movie.

I saw your trip pictures to Greece with Desmond Elliot and co, what did you go there to do?

The trip was a tour to Europe, about 13 cities to be visited to stage a show tag, laugh & groove in Europe, & to shoot 2 movies.

And why did you choose Greece even though it's not an English speaking Country?

Greece was our based country that we moved from to visit other cities, and moreover we have some partners there already, they speak English too.

Will you be going for Europe trip soon, if yes where?

Taiwo OdualaYes, there is plan to have another show &Movie shoot this year in Europe maybe during summer or after summer. I will be visiting Germany, Holland, Greece, Spain, Italy, Belgium, Ireland etc.

Is there any movie you are directing at the moment and if yes tell us about it?

Yes I am directing about two movies this month, and after which I will continue my biggest project that has commenced since last year. It is a very big one; it's a humanitarian movie, a movie about orphans, less-privileged, right to education of a child, & humanism. It's in the likes of big movies such as: slump dog millionaire, hotel Rwanda, brave heart, etc. it's a natural story with high stakes of technical. It's titled: ADEJONWO (HOPE OF ORPHANS) which is coming soon.

And how soon are we expecting it in the market?

It's not just going to come out in the market; it's a cinema standard movie. So, it will first visit the cinemas all over the world, also there will be world premiere before we can think of having it on video market.

I heard Most people abroad watch movies on the internet instead of buying (How does that affect the income in Nigeria movie Industry?

It's really a problem they watch our movies on YouTube & the likes, well we hope someday soon there will be a solution.

Is there any other business you are doing at this moment apart from being a director?

No business other than the entertainment industry. If I am not on location directing, I may be staging a show that has to do will entertainment, actors, comedians, musicians, etc. but for sure, it's about film productions and entertainment in general.

What advice are you going to give the person who wishes to be a Director in Nollywood?

Advice for people interested in directing; it is a good thing and tasking, but easy when you know the ethics, you have to really learn the rudiments, knowing all it takes to be a director and you have to have a creative mindset in order to interprets scripts into good movies, in order words, train or learn well to enable you be a good director.

Are you Married or do you have any body in your life?

Not married, am still single.

What will you say about the many divorces in Nollywood ?

About the divorce in the industry; it is discontent of individuals, or possibly get carried away at points in time, egoism, many times in some cases. I think it is right for every individual to be sure of who he or she is getting married to and not just jumping at partners without true love and understanding. We have good quality couples in the Nollywood today that have been married for ages and they are still together, so I think it's just being sure of whom you want to say I DO to, and then there is no going to be divorce in marriages.

What do you think about Nollywood of today?

Well, Nollywood is the greatest thing that ever happened, and it's growing to its great stage.

Taiwo, thank you so much for your time, Nollywoodgossip wish you the best.

Thank you & God bless you too.