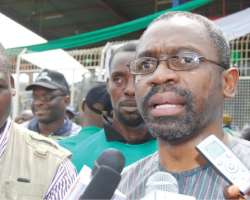 Speaker Dimeji Bankole made the announcement at today’s House sitting.

Gbajabiamilah, who was before now the Minority Whip, takes over from Honourable Mohammed Ali Ndume who defected to the Peoples Democratic Party (PDP) and is currently the senatorial candidate of the party for Borno South Senatorial zone.

The new minority leader was elected into the House in 2003 on the platform of the Alliance for Democracy (AD) and was re-elected in 2007 under the Action Congress of Nigeria (ACN) and was consequently made the Leader of the party. He represents Surulere 1, Federal Constituency of Lagos state.

Nelson Alapa, the new Deputy Leader is the only ANPP Legislator in the House from Benue and represents Ohimini/Otukpo federal constituency where the Senate President, David Mark hails from.

Alapa holds a diploma in law and was a businessman before his election to the House in 2007. Prior to now, he was the Deputy Minority whip following the defection of Honourable Bello Mutawalle from the ANPP to the PDP.

The new Minority Whip, Abdurahman Kawu Sumaila, who lost out in the bid to succeed Ndume as Minority Leader, was until today the Deputy Leader. He represents Sumaila/Takai Federal Constituency of Kano State and was first elected to the House in 2003. He holds an Advanced Diploma in Education Management from the Bayero University, Kano.

Recall that the Deputy Speaker, Honourable Usman Bayero Nafada had at the resumed plenary on Tuesday explained that there were several notices of members defecting from one party to the other and the Office of the Speaker was compiling the list of members of each of the political parties to ascertain their exact numbers.