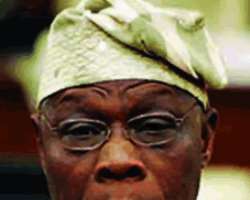 As the tug of war between Governor Gbenga Daniel of Ogun State and former president Olusegun Obasanjo continues, a Federal High Court was on Tuesday told how a faction of the state chapter of the ruling Peoples Democratic Party (PDP) loyal to the former president fraudulently obtained the order barring the Independent National Electoral Commission (INEC) from recognizing the governor's list containing names of candidates for the April general elections.

It would be recalled that the court presided by Justice Abdu Kafarati had on January 26, 2011 granted an order of interlocutory injunction restraining INEC from accepting the list of candidates who emerged from the party primary conducted by a party loyal to the governor.

The plaintiffs who secured the order were Chief Adetunji Olurin, Babatunde Fadun, Dave Salako, Mr. Wale Solaja and Seun Adesanya who were said to be loyal to Obasanjo. But at the resumed hearing of the matter yesterday, the PDP said the court was deceived into granting the order as counsel in the matter misrepresented the facts of the case and thereby misleading the court to issue the order.

Counsel to the PDP, Chief Lateef Fagbemi (SAN) who moved a motion seeking to vacate the said order on the grounds that it was granted without jurisdiction.

In addition, he told the court that its order was made on the basis of concealed material facts and misrepresenting of facts by the plaintiffs.

The court had restrained the INEC and the PDP from accepting the list of candidates sent by the dissolved Ogun State Executive Committee led by Chief Joju Fadairo.

The court acted upon a motion on notice filed by Chief Adetunji Olurin, Babatunde Fadun, Dave Salako, Mr. Wale Solaja and Seun Adesanya.The document was supported by a 53-paragraph affidavit sworn to by Wale Solaja and moved by Mr. O. O. Fakunle (SAN).

Justice Abdul Kafarati had specifically ordered, 'That the first (INEC) and second (PDP) respondents are restrained from accepting, compiling, announcing, using, validating or otherwise acting upon the results of the primaries/congresses conducted in Ogun State pending the hearing of the originating summons.

'That the (INEC) and (PDP are restrained from announcing or making any pronouncement validating the result of the primaries/congresses conducted in Ogun State by the dissolved Ogun State Executive Committee of the second respondent pending the hearing of the originating summons.

'That the (INEC) and (PDP are directed to approve, accept, compile, announce and use as its responsibilities require, the results of the primaries and congresses of the second respondent conducted by its harmonized executive committee from which the applicants emerged as the candidates of the second respondent in Ogun State for the general elections and delegates to its national convention/presidential primaries pending the hearing and determination of the originating summons'

Fagbemi made efforts to move the motion, but counsel to the plaintiffs opposed him on the ground that the motion was not ripe for hearing.

In his argument in the motion, Fagbemi said: 'Plaintiffs misrepresented facts to the honourable court that the Chief Joju Fadairo-led executive committee of the PDP in Ogun State had been disolved, when to the knowledge of the plaintiffs, there was no such dissolution;

'Plaintiff concealed from the court the fact that an Abeokuta High Court in suit number AB/166/2010-Chief Joju Fadairo and 28ORS Vs. Dr. Okwezilieze Nwodo and 5 Ors had restrained the PDP from interfering with the Chief Joju Fadairo execuitive committee of the party in Ogun State;

'Plaintiffs also concealed from the court the fact that Peoples Democratic Party complied with the order of Abeokuta High Court in suit number AB/166/2010 by not dissolving the Chief Joju Fadairo-led state executive committee in Ogun State;

'The order directing the Independent National Electoral Commission (INEC) to act on the list of harmonized executive was made without jurisdiction.'

In a related development, chairman of the PDP in Ogun State had applied to the court to be joined in the suit.

In a motion on notice, filed by his counsel, Chief Taiwo Oyetibo (SAN), Chief Fadairo asked for an order of the court to be made a party in the suit.

In an 11-paragraph affidavit deposed to by Gbenga Ojekunle, the applicant said the party seeking to be joined was not disqualified or incapacitated from performing the functions of his office by any subsisting order of injunction of any court of competent jurisdiction in the Federal Republic of Nigeria.

He said the party sought to be joined was a proper and necessary party without which all the issues in the suit could not be decided one way or the other.

The case had been adjourned to February 15, 2011 for parties to argue the application before the court.