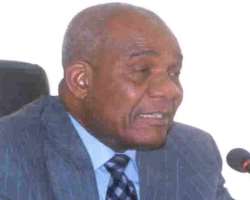 Dr. Guobadia was a former Chairman of the Independent National Electoral Commission (INEC) between 2000 and 2005 when he bowed out of the commission.

The Edo State born educationist and administrator was a former Commissioner of Education and also Commissioner for Finance and Economic Planning in the old Bendel State.

Information on his educational background on Wikipedia said he attended C.M.S. Primary Schools in Benin City (1939 -1945); Government College, Ibadan (1946 - 1951); University College Ibadan (1952 - 1957). In 1962, he won a scholarship for graduate studies in the United States and was awarded the Ph. D in Solid State Physics from the University of Pittsburgh, Pennsylvania, USA in 1966.

He was until his demise an honorary life fellow of STAN and Special Member of the Senate of the University of Benin, Benin City.