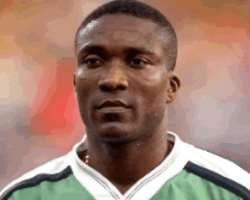 •Uche Okafor
Body of the late Nigerian soccer star, Uche Okafor, who allegedly committed suicide July 6 in Texas will begin its final journey to the great beyond with a wake keeping slated for Friday at Sandra Clark Funeral Home Located at 6029 South R.L Thornton Freeway, in Dallas, Texas.

A family friend of the player told African outlook that the wake keep which was being organized by friends and family members of the late player would afford his friends and members of the Nigerian community in Dallas opportunity to pay their last respect to the player, who represented Nigeria in its first soccer World Cup appearance in USA in 1994.

According to the source, the viewing and funeral service for the player would take place at Sandra Clark Funeral Home, while the night vigil would hold at Imperio Banquet Hall which is located at 1311 Market Place, Garland, Texas. The body is expected to arrive Nigeria on February 11, while the interment has been tentatively fixed for February 17 at his home town of Umuabali, Ubomiri, in Mbatoli Local Government Area of Imo State.

The late player was survived by a wife; Ifeyinwa Okafor, daughter, Tochukwu Okafor, an aged mother, Philomena Oby Iyoho and a brother Chidi Okafor among other six half brothers and sisters.

Meanwhile, the Tarant County Medical Examiner's office which is processing the body of the late player is yet to submit any official report on the inquest to determine the cause of the violent death of the player who family members had alleged was murdered in Dallas.

A family source had earlier told African Outlook that the late player had complained bitterly about the manner in which some of his family members in Nigeria had mismanaged his business.

The body of the Eagles'former defender was found dead by his wife hanging in the hall way of his upstairs home at 3173, Fox Hollow Drive, Little Elm, Texas on January 6 in an apparent suicide.

But his family members had claimed that Uche, who was a member of the gold winning team in the 1994 Nations Cup finals in Tunisia, had no reason to kill himself and had petitioned the Texas Police to look at the case as murder.

Tom Reedy, the Public Information Officer for Denton County Sheriff's Office, the jurisdiction in which the case is being investigated informed African Outlook that the case had neither been listed as homicide nor suicide but pointed out that the county was yet to receive report of the coroner's inquest into the cause of the player's death.