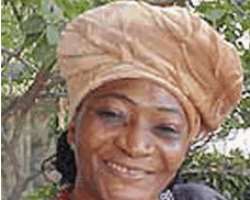 Sarah Jubril
Before the political parties' primaries, the train of the Women for Change Initiative, the pet project of the First Lady, Dame Patience Jonathan, had gone round the various states singing the song of change. Everywhere she went, she called on the Nigerian women to seek elective posts in 2011polls, even as she urged the men to strongly support those who have already made their intentions known.

The carnival-like campaign saw the women looking elegant in their green and white Women for Change Initiative attire, singing their song to state governors, traditional rulers and all the groups they felt would resist their coming out to hold elective office. Mrs. Jonathan called on the men to go with the modern trend, as in South Africa, Senegal and Rwanda, rather than sticking to the old tradition of suppressing the women and relegating them to the background embrace.  She assured the Nigerian men that the women will remain loyal and committed and will continue to take care of the home front while in politics.  She also advised women to shun discriminatory practices against fellow women and unite in their quest for equitable political representation in the country.

Her initiative got endorsement from the high and mighty as well as the market women in the grassroots, which even elicited positive comments from the like of the chairman, House Committee on Women Empowerment, Hon. Nkiru Onyejeocha, though with a caveat: 'The concept of Women for Chance Initiative is that every woman should come out and whatever you are able to do, do it well and be a trail blazer, but let it be that women are coming up. So the only way that will help is to create awareness for women that your place is not just where the men have kept you…but as far as I am concerned, if we like we can start talking from now till eternity we are not going to achieve anything unless we put the 35 per cent affirmative action into legislature.'

Onyejeocha foresaw the outcome of the results when she said: 'Women are their own enemies. It is time we began to tell ourselves the truth: women do not cooperate with themselves. A woman will instead of nominating a fellow woman nominate a man either behind you or openly, some will tell you to your face they don't have any business with women. If you invite them to participate in one thing or the other they tell you, 'I am not interested in this woman matter', 'I didn't come here because of woman matter', I didn't come to the National Assembly because I am a woman. I fought with the men.'

No wonder their confidence was deflated by the time all the songs and clapping died down and they went to the field only for them to be humiliated at the various parties' primaries.

At the Peoples Democratic Party (PDP) Convention held in Abuja, Sarah Jubril came face to face with the two political gladiators: former vice president Atiku Abubakar and President Goodluck Jonathan, but for her own vote no single woman voted for her. Not even her campaign slogan that her drive to contest was based on a desire to have 'ethical leadership and good governance,' could swing votes her way. Some women, including the Minister of Women Affairs, Josephine Anenih, were seen on national television pouring out their lamentations over the heavy blow that was dealt them.

Of all the parties, it is only in the PDP that women aspirants were visible, along side their male counterparts. But the dismal performance of women has been blamed on lack of financial muscle to contend with the men as well as the violent disposition of the male politician in seeking elective post.

In all, many woman lost. They include:
Sarah Jubril
You might choose to call her a perennial contestant and you are not wrong, but her admirers call her 'a veteran presidential aspirant,' whose ambition to preside over the nation dates back to 1992. She was an aspirant in the defunct Social Democratic Party (SDP) in the botched Third Republic. She also aspired in 1998 on the platform of the PDP and lost the presidential ticket to Gen. Olusegun Obasanjo, who went on to win the polls.

In 2003, she took a dive again but this time on the platform of the Progressive Action Congress (PAC) and became the first woman to contest a presidential election in Nigeria. She later returned to PDP, to jostle for the party's ticket in 2007. She scored four votes at the convention, which the late President Umar Musa Yar'Adua won.

Jubril, who until recently chaired the Governing Council of the College of Education (Technical), Asaba, again declared to run for the highest office in the land on August 26, 2010, not even the discrimination she suffered in the Mallam Adamu Ciroma-zoning committee could deter her, as she went ahead, just like in previous attempts, to contest at the PDP presidential primaries against two powerful gladiators and came out being the only one who voted for herself.

Senator Eme Ufot Ekaette
The wife of the former Secretary to the Government of the Federation and former Minister of Niger Delta Development Ministry, Eme Ufot Ekaette, was said to have lost at the primaries to pick up the nomination to represent Akwa Ibom South or Eket senatorial district because the political pendulum suddenly changed, though she had lost to the former first lady of the state, Mrs. Helen Esuene, a woman considered to be more grounded among her people, having been with them for the past 35 years.  It is believed her elitist lifestyle and the fact that she is not grassroots inclined cost her the ticket. She was also said to have been too over confident in the automatic ticket that she didn't do much to persuade the people. By the time she realised this, it was too late to make amends, hence she paid very dearly for it.

Though Ekaette, has petitioned the Chairman of Independent National Electoral Commission (INEC), Prof. Attahiru Jega, over the National Assembly primaries in Akwa Ibom State, demanding the probe of the INEC report and the officials who monitored the primaries to ascertain their culpability, with a view to redressing the situation as deemed appropriate, many are of the view that she got the true feelings of the people, as presented through the results.

Chris Anyanwu
Senator Chris Anyanwu, the journalist and owner of Hot 98.3 FM, was a victim of the political tsunami that swept through the states that saw none of the three senators returning. Part of the complaints, though, had been that she is also elitist in style and could not connect with the people.

Senator Grace Bent
Senator Grace Folashade Bent (Adamawa South) is among the three senatorial candidates that fell by the way side during the PDP primaries in the state, despite her powerful show during her campaign, Mrs. Jonathan was in attendance. She is one visible senator through her diligent contributions to debates and sponsoring motions. She is known to have, like no other, given supportive assistance to her constituents through tangible projects, like power transformers, funding NTA's take-off and prompt personal response to problematic situations confronting her constituents. She was generous in her effort to gain acknowledgement and was one of the highest donors to the Sir Ahmadu Bello Sardauna of Sokoto Foundation.

Many believe she lost largely to the fact that she is not an indigene of the state, though married to son of the soil. But there is also the belief that there is no love lost between her and Governor Murtala Nyako, a thing believed to have cost her the ticket.

Iyefu Adoba
The effort of the journalist turned politician to represent her people at the Agatu/Apa Federal Constituency fell flat like a pack of cards because the primaries in Benue State, for most of the political parties, did not favour female aspirants.? According to fillers from the state, it is either women were told to politely step down or you were attacked either physically or spiritually. The failure of female politicians in the state may not be unconnected with the violence that were said to have been unleashed by the male politicians and the fear by political leaders that female candidates would not bring success in the April general elections. ?Of the few female aspirants who indicated interest in the primaries, only two succeeded in getting their parties' tickets.

Those who won
Senators Nkechi Nwaogu (Abia Central), Patricia Akwashiki (Nasarawa North) and Zainab Kure (Niger South) were the only three out of the eight female senators among the 109 member that made it. Gbemi Saraki (Kwara Central) is running for governorship on the platform of the Allied Congress Party of Nigeria (ACPN), the party she defected to from the PDP. She will make history as the first elected female governor in Nigeria if she wins. The nomination of Iyabo Obasanjo-Bello's (Ogun Central) is mired in controversy due to parallel primary elections, one of which produced Ms. Lola Abiola-Edewor, a former member of the House of Representatives and daughter of the late political and business guru, Bashorun M. K. O. Abiola.