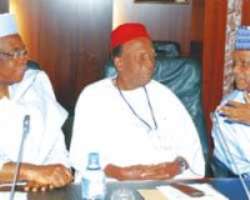 Specifically, the PAC drew attention to the size of government at all levels and called on the President to tackle these and other developments impacting the economy.

Meanwhile, the Presidential Joint Task Force set up by the Federal Government to ensure 100 per cent physical examination of cargoes coming into the country has raked in over N10 billion into the coffers of the Nigerian Customs Service.

The task force which is made up of operatives of the Independent Corrupt Practices and Other Related Offences Commission (ICPC) and the Customs Services, has also seized 73 containers containing contraband items.

And the need for good leadership at all levels of governance has again been stressed just as two governors, Rotimi Amaechi and Babatunde Raji Fashola of Rivers  and Lagos states questioned the readiness of Nigerians for change.

Speaking yesterday at a conference with the theme, 'Agenda for the Lagos Business School, Nigeria: The Next 50 Years -- Pathway to a New Nigeria,' Amaechi who recalled Tunisia's recent revolutionary experience, which led to the fleeing of President Abidine Bin Ali and resignation of Prime Minister Ben Azi, the governor pointed out that the change in leadership was achieved starting from one individual who set himself ablaze and consequently lost his life. He noted that no single bullet was shot and the mass protest was not even organized.

'To me, Nigeria appears not ready for a change. How many of us abhor corruption? Why do we also go to the governors, always asking for contracts? Why do we abuse a former governor because he does not have fleet of cars? Nigerians dislike democracy. When our friend or brother is arrested, we are often so desperate, putting pressure on the police not to allow the case to get to court,' he stated.

He stressed that change ordinarily means breaking away from the past. 'If you want to stop armed robbery you must provide alternative to robbery. Nigeria is richly blessed, if we have good leadership a lot of things will change', he said.

PAC, in its recommendation submitted to President Jonathan asked the federal government to begin the process of merging and reducing the number of Federal Ministries and other government agencies 'to help cut down heavily on government unnecessary spending'.

Minister of Finance, Dr. Olusegun Aganga had in September last year set up a committee to review the bourgeoning current and overhead expenditure of the MDAs.

Danjuma told journalists at the end of the PAC meeting with the President that the cut down in overhead by government agencies would help direct government spending on infrastructure development.

Danjuma said one of the suggestions made to Jonathan at the meeting was 'reducing the number of ministries is one of them and where there are functions they should be rationalized'.

He stated that boosting the nation's economy was paramount to the Presidential Council. According to him, the President assured the Council 'that most of the points we raised are already being addressed  by government. And we have been promised that we shall have a feedback from government. And even if necessary, we shall be involved in finding remedies to all the issues we have raised.'

Danjuma appealed to Nigerians to be patient with the government on the issue of the economy as 'it wasn't necessary to demand for a time tag. These things will take a long time.'

He had earlier at the commencement of the meeting congratulated Jonathan for his victory during the PDP primaries.

Danjuma also commended the government for the success achieved in the power supply sector, but expressed concern about the delay in passing the Petroleum Industry Bill.

The President had said: 'Issues of the economy are critical, since you can't provide education, health or security without resources generated from a robust economy.'

The time to get things right, according to Fashola, is now, even as he lamented the recent three amendments to the national Constitution.

Describing the exercise as merely trivializing serious issues of nationhood, Fashola remarked: 'We missed the opportunity of having state police to compliment the effort of the central police. How can we empower State House of Assemblies to make laws for the states, yet there is no corresponding empowerment to enforce the law?'

Fashola also lamented the inability of the constitution amendment exercise to allow various states of the federation to participate actively in crucial matters of the country.

The silence on 'true federalism' also drew the ire of the Lagos governor, who in addition raised the question: 'Do we really want to change?

But Amaechi stressed that his government firmly believes that that change would come when the people were better aware and properly educated on matters affecting them and their children. His words: 'In the last two years, Rivers State has consistently come first in education. The primary schools we are building are equipped with ICT to encourage the use of ICT by children. What we met on ground were schools without even toilets'.

He said most of the local councils whose statutory responsibility is to take care of primary schools and primary health cares, lack the capacity to carry out this function with the meagre funds allocated to them by the Federal Government. He stressed that most the Councils only exist 'just to find jobs for the boys'. He said to change the society, there is need to change approach to delivery of education, particularly primary and secondary schools. He pointed out that over 426 schools are being built in Rivers State, with 30 students per class.

Pointing out that school fees have been abolished in the state, Amaechi contended that whatever achievements made now, may not be noticeable until about next 10 years when those who benefitted from the scheme will start making contributions to the society.

In a report submitted by the ICPC Team in the Task Force, of the 73 containers seized, 23 of them contained contraband of various textiles.

The report also indicated that the Task force was able to collect over N367 million from wrong and under declaration of goods by importers and their agents.

The ICPC Team in the Task Force also revealed that on January 13, 2011 100 kilogrammes of cocaine valued at N1.1 billion concealed inside containers containing Tiles were seized by them.

'Already, the container which originated from Bolivia have been seized while the Agents responsible for the contraband have been arrested and presently in the custody of the NDELA for further investigation' the report indicated:

Furthermore, the report said that three Customs officers responsible for clearing of the 23 containers of contraband of textiles have been arrested and charged to court for alleged economic sabotage while 16 senior Custom officers said to be involved in one form of alleged activities in the Port have been transferred from the Apapa and Tin Can Island Ports in the last one month.

The report also disclosed that the first Head of the Task Force, one Comptroller Edike was removed and replaced by Comptroller Lima as part of measures to ensure the full realization of government policy on generation of revenue by the customs service.

In the report, the team said that most importers and agents were not sincere in their activities'as they set out deliberately to defraud the government by wrong declaration and under declaration of goods in their containers. We can say that 90 percent of the containers were not appropriately declared.'

The Task Force which has ten ICPC Operatives was set up by the Federal Government to enhance revenue generation by the Nigerian Customs for the country.

Secondly the Task Force was mandated to assess the operational procedure of the Customs Service in the various parts with a view to know how transparent they are.