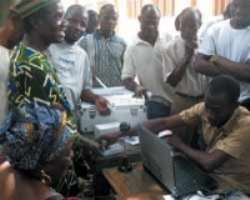 • 800 DDC machines fail to arrive in Anambra
• Six suspects in custody over   device theft
• Mimiko seeks extension
IF Chairman, Independent National Electoral Commission (INEC), Prof. Attahiru Jega, has a magic wand, now is the time to press it into service.

Reason: Six days into the on-going voters' registration exercise, some of the problems identified in the process remained unsolved yesterday as prospective voters trooped out en masse nationwide to obtain the voters card.

But President Goodluck Jonathan yesterday declared that government would ensure that every eligible voter is registered, hinting that the exercise might be extended towards this end.

The President told the delegation of the G-20 group of Northern politicians predisposed to his Presidential ambition who came to congratulate him on his emergence as the standard bearer of the Peoples Democratic Party (PDP) that the complaints trailing the exercise and the willingness of many people to wait hours on the queue indicated that Nigerians were eager to perform their civic duties.

The President noted that the ad hoc workers employed by INEC, including members of the National Youth Service Corps (NYSC) may not have been adequately trained for the exercise but expressed optimism that the process would eventually turn out well.

His words: 'The machines are slow in some cases. I believe that the training too may not be enough. I think the youth corpers were not properly trained. I believe we will get through these challenges. We will not stop until all eligible voters have registered. The complaints by Nigerians show that so many are interested in registering.'

President Jonathan thanked the delegation, led by former PDP Chairman, Chief Solomon Lar, for its support during the party's primaries, enthusing that with such backing the April Presidential election 'is as good as secured' for him and Vice President Namadi Sambo.

The President also gave his support for a Northern Economic Summit, which would be convened before the April polls, saying it would align the region's economic needs with that of the current federal administration.

In Anambra, Governor Peter Obi yesterday raised the alarm that over 800 registration units across the state had not been furnished with the Direct Data Capturing (DDC) machines, saying that the exercise was not going well in his state.

He said: 'The exercise is not going well as expected. I have quietly gone round the state. In most cases there is no machine at all at the registration units. From my observation over 800 registration units have no machines for the job. Even where they had machines, they were either not functioning or are very slow.'

Also, Ondo State Governor, Olusegun Mimiko, has argued for an extension of the voters' registration exercise 'in view of the lapses and technical hitches that had characterised the process so far.'

Mimiko, who spoke yesterday during an observatory tour of some registration units in Akure, the state capital, expressed worry over the hiccups and urged INEC 'to brace up and correct the anomalies very quickly.'

However, the governor commended Ondo residents for their enthusiasm to perform their civic responsibility by registering despite the frustration being encountered.

According to him, 'the performance is less than satisfactory. The pace of registration is disturbing. There are basically some technical errors in some of the machines. Some of these problems are being rectified but my worry is that I don't know how many people will be able to register within this time frame.'

Arguing that INEC should consider extending the registration period, Mimiko said: 'In some cases, INEC is trying to solve some of these problems but there are many of them. We'll continue to interface with INEC to ensure that the exercise is successful at the end of the day. I don't have any doubt in my mind that this exercise has to be extended in term of time line.'

And, INEC yesterday disclosed that it lost two DDC machines in Bayelsa State but warned it was foolhardy of the thieves to think they could get away with it.

The two machines were allocated to Units 24 and 33 in Southern Ijaw Local Council of the state. They were allegedly taken to a remote area in Yenagoa for clandestine registration.

Resident Electoral Commissioner for Bayelsa, Edwin Nwatarala who addressed the media on the registration challenges in the state, assured that two new DDC machines were already being configured for the two units.

'We are being proactive about it. We have acquired two new DDC machines and the ICT department is configuring them for the two units of that ward. We expect them to start registration again by tomorrow. Whoever took the machines took them out of ignorance. They cannot gain any leverage by stealing DDC machines,' Nwatarala stated.

However, INEC yesterday expressed worries on shortage of funds for the execution of all the components of the registration exercise.

Briefing the House of Representatives Committee on Electoral Matters on the exercise so far at the National Assembly, Prof. Jega, stated that the registration process would have fared better if INEC had enough money to prepare and train its staff members for the exercise.

Lamenting the enormous challenges the registration exercise had posed to the commission, Jega said: 'There are challenges and some of these have to do with the level of training of the people handling the machines. We wish we had more money for more days of training on the machines.

'I know when I say more money every Nigerian would laugh because people say that we have already been given too much money, but frankly we could have done better with more time for training because the more people are trained, the better they are.'

Last August, the National Assembly approved N87.7 billion for INEC to prosecute this year's general elections, including the on-going registration exercise and other related activities.

Jega announced that police had arrested six persons who allegedly connived with some unnamed politicians to move the commission's DDC machines to unauthorised locations, adding that they would soon be prosecuted.

On the possible extension of the registration period the INEC chief said: 'Right now the major concern nationwide is whether we will be able to register everybody within the 15 days. We believe there is no cause for alarm. We will make appropriate reviews and if it becomes clear that we have to take additional period to make sure that more people are captured, we will definitely do so.

'I want to plead with Nigerians on the need for patience, the need for everybody to contribute positively to the process. We have said repeatedly that INEC alone cannot do it; we need full participation and involvement of the people.'

Chairman of the House committee, Musa Sarki Adar, told the INEC chief that the committee was worried by the myriad of protests and complaints trailing the conduct of the registration exercise.