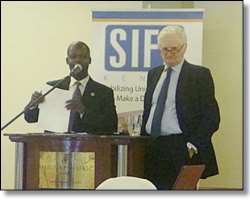 The author with Nicholas Walsh, Vice Chairman, President and CEO of Chartis International
Listen to article

When the SIFE Kenya Business Advisory Council mandated me to host an event on the theme “Youth leadership after 2030”; it hit me that I will be somewhere seventy to hundred years by then. Another challenge was on how to have a successful event with a unique theme on January 10th, a time of the year when Kenyans are looking for their office keys to get back to work. The turnout of people for the event confirmed the fact that the country already has people in business, civil service and students keen to focus beyond 2030.

One delegate had asked earlier: “How will Nicholas Walsh, Vice Chairman, President and CEO of Chartis International figure out Kenya's leadership after 2030? He is not Kenyan.” Nic, as I now call him had shared with me his passion for women rights and children as part of his interests apart from running a big insurance business when I met him in Los Angeles last year. I figured that someone who has focus on a section of the population that we in Africa have neglected for a long time (read, women, youth and children) might just be the right person to talk about issues beyond 2030.

Although Nic's presentation was not about Kenya politics passé, it however illuminated the fact that for any society to be prosperous and stable, it must address the causes of exclusion and put an end to it. He cited the fact that when India wallowed deeply into the caste system that subjected the majority to low class and outcast status; it couldn't take-off. When India revised the caste system a little and brought its citizenry and women into the mainstream, it took off at a lightning speed in terms of development.

Recent political developments, especially after the naming of the “Ocampo six” reveals and buttresses a belief that Kenya has an underground caste system. The country appears to belong to a few individuals and to tribes that boast of high population. Going by Nic's observation on India, it will be difficult for Kenya to successfully launch into a middle income and developed country if it sustains the politics and economics of exclusion.

Another aspect that Nic addressed was the need to have all children access education. He pointed out his excitement when he noticed that rural Tanzania and Southern Kenya was dotted with schools all over. To have great leadership after 2030, individuals and a country must invest in its children's education. I have in my previous writings used terms such as “operating system” and “software” to address this issue. Kenyans and by extension Africans must invest in imparting skills to youth to enable them to be innovative and create processes that produce solutions. To paraphrase Nic, youth should not be synonymous with chatting on Face-book and Twitter the whole day as a way of being creative; they must create new ways to solve problems!

Kenyans have been overdosed on five year cycles of political leadership to an extent that less time is spent on futures beyond the known. Kenya's vision 2030 through its social, economic and political pillars is a fair attempt to address this. For this vision to be true to its mandate, it must urgently address the underground caste system that excludes tribes, women, youth and children from the mainstream agenda of the country.

The delegates who attended the first SIFE Kenya roundtable to focus on years beyond the known, are keen to turn 2011 to be a year to nurture the youth leadership beyond 2030. Long term focus, creating structures to facilitate “inclusion” is what will ensure Kenya records a GDP of over $6,000 per year.