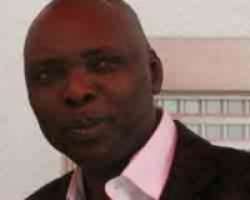 Orders NFF to maintain status quo
A FEDERAL High Court sitting in Lagos yesterday ordered the Nigeria Football Federation (NFF) and the Nigeria Premier League (NPL) to refrain from conducting fresh elections for the chairmanship of the NPL.

The court also ordered the Aminu Maigari-led NFF board to maintain status quo as regards Davidson Owumi's chairmanship of the NPL. However, the NFF was adamant yesterday, saying that it would not comment on 'a matter that is in court.'

The NFF leadership had annulled Owumi's victory as NPL chairman on December 29 and directed that a fresh poll be conducted within 14 days. The body went further to ban Owumi from taking part in the re-run election. But Justice Okechukwu Okeke ordered the body yesterday to maintain status quo in respect of Owumi's chairmanship of the Premier League.

He also ordered the NFF and the NPL to refrain from conducting fresh chairmanship and chairman of chairmen elections into the league board. The NFF had fixed tomorrow (January 12) for the proposed election.

Justice Okeke gave the order following a motion by Davidson Owumi on his purported removal during the December 29, 2010 annual general meeting held in Uyo, Akwa Ibom State. Okeke, who adjourned the matter till the 17th of this month, urged the parties to maintain the status quo pending the hearing of the motion.

In the motion dated January 4, 2011, and borne out of a suit filed by Lagos lawyer, Jiti Ogunye, against the NFF and 10 others, Owumi is seeking an order of interlocutory injunction restraining NFF and the league board and other defendants whether by themselves, their servants, agents and or privies from implementing and/or enforcing the Prof. Akin Ibidapo- Obe arbitration panel recommendation.

Owumi, in an affidavit deposed to by his counsel, Yomi Obafemi, urged the court to determine whether the members of the NFF board and its chairman could carry out and or discharge the duties and functions of that office by virtues of the election of August 26, 2010, which was annulled by Justice Okon Abang of the Federal High Court.

He also wants the court to determine whether the purported decision of the NFF and its chairman on December 29 to annul his election as NPL chair as well as directing the board to conduct a fresh election within 14 days while the suit was pending is an affront to the majesty and integrity of the court.

Owumi, through his counsel, averred that if the NFF and NPL officials were not called to order by suspending the purported nullification and reverting to the status quo before the illegal nullification and allowing him to continue as chairman, more damage would be done to football in Nigeria.

In the substantial suit, Ogunye brought four questions for the determination of the court, asking the court to grant him six orders, among which is an order of interlocutory injunction restraining the officers and members of NFF and Aminu Maigari, its chairman, and other executive members from further conducting, parading, addressing or describing themselves as duly elected members and officers of the Governing Board (Executive Committee) and Congress of NFF pending the hearing and determination of the substantive originating summons herein.

According to him, this is necessary due to the elections purportedly conducted into the said committee and congress on August the 26, 2010, which he regards as illegal. Ogunye argued that the order made on September 6, 2010, by Honourable Justice Okon Abang of the Federal High Court, Lagos, in Suit No FHC/L/CS/962/10 (The Registered Trustees of the National Association of Nigeria Footballers, NANF v Nigerian Football Association, NFA & 7 Ors), which annulled the elections the NFF conducted on August 26, 2010 is, upon the discontinuance of the suit, being impudently disobeyed by the board and congress of the NFF.

He averred that the members have reinstated themselves into office and were now discharging the functions and duties of the offices pursuant to the purported mandate they obtained in the said annulled election, arguing that the actions of the NFF violate the provisions of the Constitution of Nigeria, assail the integrity of the Federal High Court and the sanctity of its orders, subvert the rule of law, negate the orderly administration of justice in the country, impact negatively on his law practice, and adversely affect the faith of his clients and prospective clients in the inviolability of the orders of courts.

Ogunye pointed out that in order to avoid a situation whereby a fait accompli would be foisted on the court, the court had earlier ordered parties in the suit between NANF and NFF to maintain the status quo ante bellum.

Speaking with The Guardian on phone yesterday, NFF Chief Media Officer, Ademola Olajire, said: 'I can't speak on the issue for now because it is a matter that is in court. Our lawyers know what to do. If there is need to issue a release on it, I will get back to you.'