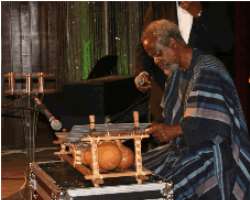 Sofowote
With pomp and ceremony, Glowing Channels Foundation staged its 12th yearly concert, to give succour to the needy, as well as provide entertainment for its teeming patrons. A bond of love enveloped the Main Auditorium, University of Lagos, Akoka, Yaba, just as palpable feeling of joy and gaiety pervaded the atmosphere.

Notable artistes and arts enthusiasts were in attendance to give the audience, mostly a group of families numbering about 600 persons, something to cheer about. Generally, it was an evening of classical, choral, instrumental and highlife music, as well as drama and poetry.

The concert, which held under the theme Sparkling Joy in Gratitude, brought together an assemblage of popular and budding talents of varying age groups, some of whom were performing for Glowing Channels for the first time. Although the attendance was poor, compared to last year's edition. The 2010 edition is unique in the sense that it was the first time, since the concert series came into being in 1998, that it held after Christmas.

The previous editions usually took place on the second Sunday in December; just before Christmas. It was also the first concert that was put together by Glowing Channels Foundation, which was inaugurated late 2009 to ensure that the yearly charity concert outlives Motunlayo Adefunke Sofowote, the woman who has been the prime mover behind it. 'Many, many things fizzle out the moment the arrowhead is no longer there; I don't want that to happen to Glowing Channels,' she noted. From now on, she added, 'Glowing Channels Foundation would continue to run the show. If you notice anything wrong, hold them responsible.'

The performing artistes gave a good account of themselves, compelling the audience into intermittent laughter. Cobhams Asuquo, the lawyer-turned musician who made his debut at the concert, for instance, was simply electrifying. He held the audience captive for about 15 minutes, with his soulful tunes and melodies. Asuquo appeared very passionate about what he does; as he performed with his entire being. The solo effort of Olumide Dada, another debutant, was also well appreciated. To the delight of the audience, Dada's baritone voice boomed intermittently in the large auditorium, as he did three numbers in quick succession.

Another debutant, Charles Adeyemi, a youth who is finding outlet in poetry, as well as prose, spiced the occasion with a poetry recital entitled The Call. Blessing Gam-Dede, a delightful tenor soloist who has an incredible way of modulating her voice as she performs, was one of the regulars that thrilled the audience during the concert. Listening to Gam-Dede miming Adolf Adam's O Holy Night was quite a moving experience. Her features got completely transfigured once she started singing. An all-male choir backed her during the concert.

Other regulars that participated at the concert include Iyalla Lemuel, another tenor soloist; Footprints, a group made up of talented children between the ages of four to 12; as well as Strings Ensemble, a group made up of Amakor, Abayomi Kafaru, Kolade Kafaru, Kemi Tiamiyu, Mowasefeoluwa and Ibukun Kafaru. Strings Ensemble rendered three classical pieces, two of which were of originally by Handel and the other by Puccini.

Like previous concerts, the Sofowote family featured prominently throughout the 2010 event. Each member of the family is a talented artist(e) and the concert provides them with a platform for expression. At the moment, the size of the family has reduced to three in Nigeria, father, mother and the youngest child, Bibisanmi, as the three other siblings are now based abroad.

From his performance, there were indications that Bibisanmi, simply known as Bibi, who has been there over the years, has matured musically. Bibi, 21, has been very innovative and one can hardly predict what he had up his sleeves until he mounted the stage. Unlike the 2009 concert, when he was almost a reincarnation of Michael Jackson, Bibi was a bit sober during the last concert; he rendered three cool numbers: The Unreachable Stars, originally by Johnny Nash, with Julius Amakor on piano; Eye of the Storm, with Ibukun Kafaru on piano and Abayomi Kafaru on vocals; and Numbers of Love, a love song, with two choreographers to drive home the message.

By the time Segun Sofowote, the maestro himself mounted the stage towards the end of the show, it was obviously a show for both father and son. The elder Sofowote re-enacted some numbers from his repertoire of songs, including a dirge for his mother, who went into ancestry recently.

At 71, the multi-talented Sofowote works, creates and lives in the arts. He is a delight to behold on stage any day, whether he is acting, singing or dancing.

This time, the audience were not disappointed; his highlife numbers received the loudest ovation and attracted a number of elders to the dance floor. Earlier, husband and wife had rendered the welcome song, Earthmen Rejoice, a song composed by the former for Notes and Tones, a musical group he lead for years. Over the years, the likes of Kayode Olajide, Pa Benjamin Aderounmu (a.k.a. Kokoro), Bright Chimezie (a.k.a. Okoro Junior), Therese D'Avila, superior soprano from Cote D'Ivoire, and groups like Notes and Tones, Seye Aluko's Sound Foundation and Professor Mosun Obidike's Symphonic Voice from Ibadan have featured at the concert.

Glowing Channels, a humanitarian organisation, was established in March 1998, inspired by the memory of the late Adeyemi Olusola Lawson, to revamp wholesome entertainment for the spiritual upliftment of people, as well as a vehicle to raise funds to provide succour for the needy in society. As it has always done since 2004, the organisation honoured 10 persons, which Motunlayo Sofowote described as iconic personalities, for their contributions towards upliftment of society in various areas of human endeavour.

The 10 persons, among whom was a couple, include Ambrose and Nkechi Iwuchukwu, Cobhams Asuquo, Adewale Oludotun , Idowu Sonubi, Kolawole Raheem, Blessing Gam-Dede, Olanrewaju Oluwole, Modupe Ogunwale and Joseph Omotoye, a.k.a. Jojo. 'They are all embodiments of genuine, noble direction and human excellence,' she remarked.

Right from inception in 1998, the proceeds from the concert was always used to support one charity project or another. Also proceeds from the last concert would be used to support the blind, under the auspices of the Anglo-Nigerian Welfare Association for the Blind, ANWAB, a non-governmental organisation floated by Danlami Basharu, who is personally challenged by poor eyesight since childhood.